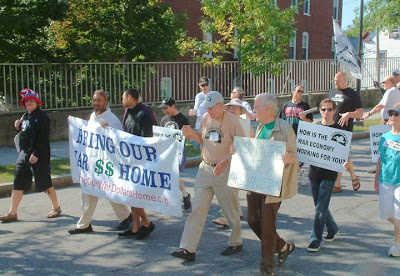 (Image by Unknown Owner)   Details   DMCA
New poll numbers are out about American citizens feelings about endless war. They don't look good for the oligarchy. Obama's job was to cool off the left, de-mobilize the peace movement, and he did a good job of it in his first two years in office. But the tide is turning against him as even his own supporters are coming to the realization that he is the magician who says nice things but continues the basic Bush plan.

In a new CBS News/New York Times poll (Sept 10-14) the following was found:

* Do you think the war with Iraq was worth the loss of American lives and other costs of attacking Iraq, or not?

* What is your impression of how the war in Afghanistan is going now?

* In answer to the question, "What do you think is the most important problem facing the country today?" people responded as follows:

These responses indicate a very clear organizing strategy to me for the peace movement and its allies.

Coming at the Afghanistan issue directly is not going to get the public's attention. They have their minds fixed on the economy and jobs. So the peace movement must take the tack that the Maine Campaign to Bring Our War $$ Home is using which is to connect the collapsing economy to spending on endless war. When that is done people get it.

The campaign has been spreading slowly but steadily across the country. The city council in Northampton, Massachusetts has recently passed a Bring Our War $$ Home resolution similar to the one passed by the Portland, Maine city council. Just today I got an email from an activist in Broome County, New York who said, "I have been active in New York with our cost of war sign on City Hall, but want to expand to Bring our War Dollars home this fall."

So you local activists out there in TV land who are looking for a way to get the public stirred up, the answer is in the poll numbers. Give the people what they want - talk about the economy and jobs with every breathe you take and they will start to listen.