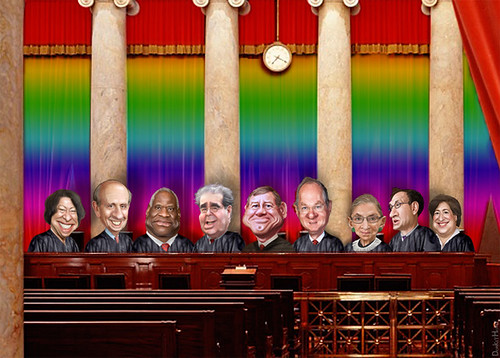 The drama of picking the Supreme Court justice to fill the vacancy of Ruth Bader Ginsburg would resemble a Shakespearean comedy if it were not so tragic. It reveals the basic fallacy of the constitutional process that allegedly upholds the judicial integrity and independence of the court but actually turns it into a sinister plot of shoddy politics. The Supreme Court is not above politics. By the process of selecting justices, it commonly becomes subordinate to the current administrative branch of government or a left-over legacy of previous administrations and their associated party.

The justices of the Supreme Court are presented with their robes as the high priests of justice, ostensibly safeguarding the essential principles of democracy: to establish justice, insure domestic tranquility, promote the general welfare, secure the blessings of liberty, etc. They should serve as the rail that guides the vehicle of democracy driven by the administrative and congressional branches. To fulfill this function, we would expect the highest level of dedication to democratic principles of fairness and equality as a sacred duty - as we would expect virtuousness from our religious and spiritual guides. We would expect them to be above the mundane biases of the petty political world.

Today, democratic ideals are expressed most commonly as the need for greater equality among people. Equality is somewhat of a vague concept since there is much disparity between individuals; but in reasonable political terms, I would understand it to mean eliminating poverty and relieving undue hardship, improving opportunities for education and access to cultural benefits of society, greater fairness in justice, and universal civility. There would be no extremes of poverty and wealth. The immense excesses of wealth we see today would be diverted towards the common good.

The corporate power structure in America today, which gives a disproportionate advantage to the wealthy elite, belies these democratic principles. Genuine democracy is perishing, or never really existed. A weak democracy can resemble fascism in disguise.

Where to begin to address this dysfunction? I would question the integrity of members of the Supreme Court. We know, sadly, that members of Congress are subject to intensive lobbying by special interests that contribute heavily to their campaigns. Supposedly, members of the Supreme Court, being appointed, are not subject to pressure of this sort. However, in their selection and confirmation for the position, their judicial leaning may already be predetermined through party affiliation. During the confirmation process, the candidate swears or alleges to be politically and religiously impartial in interpreting the constitution. Based upon the pattern of judicial opinions once they are confirmed, a case could be made that a candidate may have perjured him- or herself during the confirmation process as to whether they are impartial or biased and therefore be subject to removal on the basis of "bad behavior", according to the constitution.

As there are two general persuasions of political opinion - conservative or democratically progressive; the status quo or the general improvement of society - could a progressive judge be held guilty of perjury by "bad behavior" of lying about pre-existing biases if he or she consistently votes for progressive causes?

My answer to this enigma is that true justice is not static. It evolves as political culture matures, always favoring the improvement of society. Progressive judicial opinions should be the norm. It is only a question of whether proposed "progress" is right or wrong for improving general welfare. The constitution should not be interpreted to impede progress. What the founding fathers of the constitution had in mind should not be a factor in its interpretation, except as it concerns timeless universal principles of morality which stand above any written document.

What all this leads up to is that we need to change the process of selecting Supreme Court justices - or any federal judge. As the constitution intends but paradoxically contradicts, they should not be chosen by the president to be subordinate to his administration and its party. One concept for correcting the selection of justices might look something like this: a small pool of several candidates would be recommended and screened by an independent council composed of highly esteemed temporary members from outside of government, from both the legal and relevant academic professions, who are not selected by any government agency. The council and its staff would be government subsidized but with no-strings-attached to keep it as free as possible from political influence. Congress or the senate would review only the selected judicial candidates and vote on their choice. This plan would be a game-changer from what we have now and a powerful complement to the proposed constitutional amendment to limit justices terms to 18 years.

Note: This commentary is based partially on a previously posted article:

Related Topic(s): Supreme Court Hypocrisy; Supreme Court Nomination; Supreme Court Tenure Revision, Add Tags
Add to My Group(s)
Go To Commenting
The views expressed herein are the sole responsibility of the author and do not necessarily reflect those of this website or its editors.