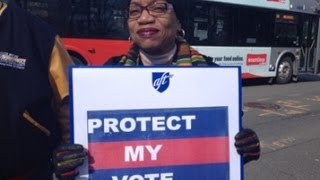 The Supreme Court is poised to decide two cases that could prove devastating to the right to vote -- the very foundation of a democracy. One case will review the Trump administration's attempt to add a citizenship question to the 2020 census. The other will consider whether partisan gerrymandering is constitutional. They are related because the citizenship question would "allow Republicans to draft even more extreme gerrymandered maps to stymie Democrats," the New York Times reported.

"It's hard to overstate the significance of the census and partisan gerrymandering cases," according to Professor Leah Litman of UC Irvine School of Law, interviewed in the Los Angeles Times. "Upholding the addition of the citizenship question and foregoing any judicial oversight of partisan gerrymandering would allow Republican minorities to entrench their political power for decades."

Moreover, Thomas Hofeller, a GOP strategist and architect of the citizenship question plan, was known as the "Michelangelo of gerrymandering." Hofeller's expertise in drawing partisan political maps "cemented the [Republican] party's dominance across the country," Michael Wines wrote in the New York Times.

The census is used to determine the number of representatives each state will have in the House, how electors are distributed in the electoral college, and how $880 billion in federal funds will be allocated between the states.

In December 2017, the Department of Justice (DOJ) wrote a letter to the Commerce Department, requesting that it add a citizenship question to the questionnaire for the 2020 Census. But Commerce Secretary Wilbur Ross had already decided to add the question and he orchestrated the letter to make it look like he was responding to a DOJ request.

Ross testified before Congress last March that the purpose of the addition was to obtain "complete and accurate information for use in determining citizen age voting populations to enforce the Voting Rights Act." Rep. Elijah Cummings, chair of the House Committee on Oversight and Government Reform, pointed out the hypocrisy of Ross's claimed rationale, saying the Trump administration has done "everything in its power to suppress the vote."

A coalition of states, counties and cities are claiming in Department of Commerce v. New York that the addition of the question is unconstitutional. They assert it would cause a significant under-count because people in households with undocumented individuals would be deterred from responding.

Indeed, the Census Department estimated that 6.5 million people could remain uncounted if the citizenship question were added.

In January, a federal district court in New York blocked the government from adding the citizenship question. The district court found that Ross's decision was arbitrary and capricious, calling his Voting Rights Act (VRA) rationale a "pretext" for a motive other than VRA enforcement. But the court said that the plaintiffs hadn't demonstrated that the purpose of the question was to discriminate against Latinos and other immigrant communities of color, which is required for a violation of the equal protection component of the Fifth Amendment's Due Process Clause.

The Fourteenth Amendment says, "Representatives shall be apportioned among the several states according to their respective numbers, counting the whole number of persons in each state, excluding Indians not taxed." The amendment does not limit the count to citizens.

During oral arguments in the Supreme Court in April, the conservative justices seemed inclined to uphold the citizenship question. But on May 30, the Court was presented with newly discovered evidence of a cover-up of the illegal racist motive for adding the citizenship question. After Hofeller died in 2018, his daughter found documents showing that he urged inclusion of the question to "be a disadvantage to the Democrats" and "advantageous to Republicans and Non-Hispanic Whites" in redistricting.

Accordingly, on June 13, the coalition plaintiffs asked the Supreme Court to delay ruling in the case. Dale Ho, director of the ACLU's Voting Rights Project, who represents the plaintiffs, said, "The significance of this case cannot be overstated. The census happens once a decade and there is no chance for a do-over." He added, "The Supreme Court should not permit the Trump administration to add a citizenship question to the census based on an incomplete and misleading record."

Meanwhile, the House Oversight and Reform Committee recommended to the full House of Representatives that Ross and Attorney General William Barr be held in contempt of Congress for refusing to provide testimony and documents relating to the census question. A few hours before the committee vote, Donald Trump retaliated by asserting executive privilege to block the subpoenaed material.

Gerrymandering is "the intentional manipulation of district boundaries to discriminate against a group of voters on the basis of their political views or race."

Related Topic(s): Census; Democracy; Gerrymandering; Supreme Court Justices; Voting, Add Tags
Add to My Group(s)
Go To Commenting
The views expressed herein are the sole responsibility of the author and do not necessarily reflect those of this website or its editors.