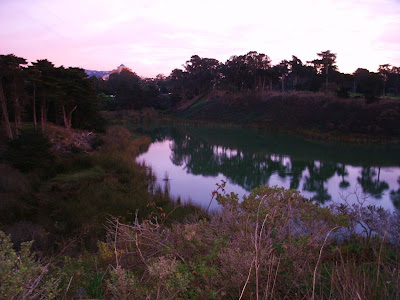 OK, so the title's a bit off: I was strolling  while musing  on Rick Santorum, but it certainly did feel like trudging through the now-infamous "frothy mix"*

THE CLARITY OF REMOTENESS

I often b*tch about the remoteness of living in San Francisco's Park Merced, but there are times when it's location seems almost heaven-sent: the sheer expanse of greenery, the lake and the ocean beyond give me an isolation that wraps around me like a comforter on a cold day. And with that isolation comes a breathing space, a chance to (at least) make an attempt at objectivity: the lack of city noises and proximity to people helps me to calm down and take stock of everything, everyone. I'm not as snarky.

Unfortunately, trying to objectively take stock of someone like Rick Santorum is nearly impossible. He is steadfastly extreme. Righteous arrogance oozes out of every pore. And, sweater vests aside, he lacks humility.

In other words, Rick Santorum is scary.

And threatening: every quiet, muse-filled stroll I take around the lake could be my last. Because as many readers know, I recently had to  battle to keep my apartment  and my worldly possessions and it was only  with the help of my landlord and several "secular" organizations that I was able to keep the place.

And my strolls around the lake.

Rick Santorum would have none of that. Because he lacks compassion as well as humility. Moral rectitude often lacks compassion for people not in the mold of people like Santorum, so in a sense, he has no framework based on humanity, only "righteousness."

I'll set aside thoughts of living in a 12'x12' SRO without a lake for now. They're too personal and they distort what little perspective I am trying to achieve.

RIGHTEOUS ARROGANCE IS THE WAY TO GO

Iowa proved one thing: the Christian Right has clout in this country; and while New Hampshire is proving to be the exact opposite in spurning Santorum, the CR will continue to use Iowa as a battering ram into the nation's psyche. It will claim that whichever the state, pockets of Iowa exist and those pockets put together are a force to be reckoned with. It will be ferocious in its promotion of Santorum. Even its fringe will be afraid to say anything against him. If he wins the nomination, imagine the reverence and awe with which he will be received at Tony Perkins' Values Voters Summit. He is becoming flush with endorsements. No matter if people think it scandalous that  some may be "purchased."

Santorum's moralizing seemingly has no limits: whether it's abortion, contraception or gay rights, his stance is one very hard line Christian Right meme. As a frequent panderer to Opus Dei (although not actually a member), Santorum has the ears of the Vatican*. He attends Mass on a daily basis (when in DC, he did so with Sam Brownback). He worships St. Augustine (the proponent of the doctrine of Original Sin). He has ties to Dominionsists. His piety is an open record.

He frequently tells people how JFK's stance in separating religion and politics hurt the country immensely.

When countering a New Hampshire voter's statement that "we don't need a Jesus candidate", Santorum had this to say:

"We need someone who believes in something more than themselves and not just the economy," he added. "When we say, "God bless America,' do we mean it or do we just say it?"


His wall of righteous arrogance has created an impregnable wall against criticism. This is why many people are shaking their heads as to how Santorum got this far. He weathered the Iowa "pay for play" scandal and now he is flat out denying that he said what he said on other issues. But he definitely  said "black" .(publicly demeaning African Americans). He definitely said  "man on dog."  (publicly demeaning homosexuals). He definitely said that having a father in prison  was better than having gay parents .

Rev. Dan Vojir is has been writing/blogging on religion and politics for the better part of ten years. A former radio talk show host (Strictly Books " Talk America Radio Network) and book publisher, Dan has connected with some of the most (more...)
Related Topic(s): Abortion Without Exceptions; Anti-gay; Christian Right; Foster Freiss; Gary Bauer; Hate-Racism-Bigotry; Homophobia; Santorum Rick; Tony Perkins; Women Issues Contraception, Add Tags
Add to My Group(s)
Go To Commenting
The views expressed herein are the sole responsibility of the author and do not necessarily reflect those of this website or its editors.