We need to jointly confront the coronavirus while constructing a humane future for the world without wasting time or resources on the continuation of brutal wars. 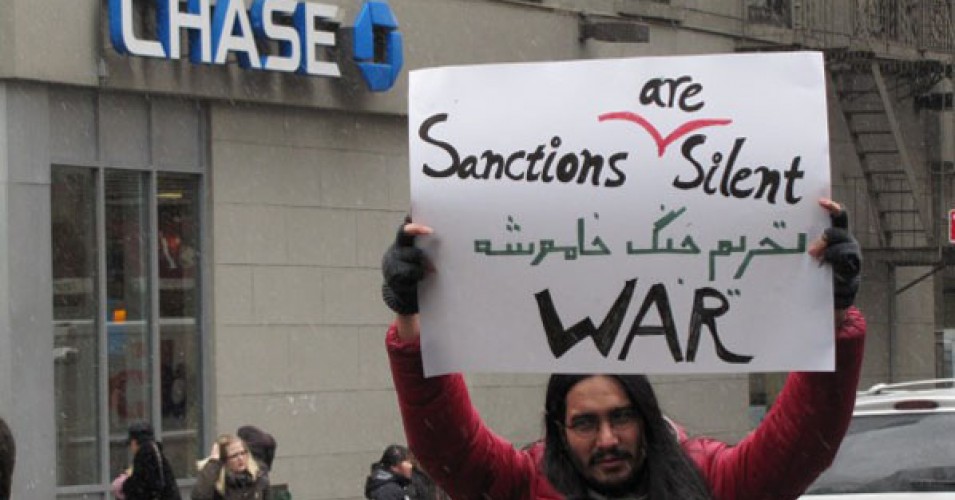 U.S. sanctions against Iran, cruelly strengthened in March of 2018, continue a collective punishment of extremely vulnerable people. Presently, the U.S. "maximum pressure" policy severely undermines Iranian efforts to cope with the ravages of COVID-19, causing hardship and tragedy while contributing to the global spread of the pandemic. On March 12, 2020, Iran's Foreign Minister Jawad Zarif urged member states of the UN to end the United States' unconscionable and lethal economic warfare.

For over two years, while the U.S. bullied other countries to refrain from purchasing Iranian oil, Iranians have coped with crippling economic decline.

The devastated economy and worsening coronavirus outbreak now drive migrants and refugees, who number in the millions, back to Afghanistan at dramatically increased rates.

In the past two weeks alone, more than 50,000 Afghans returned from Iran, increasing the likelihood that cases of coronavirus will surge in Afghanistan. Decades of war, including U.S. invasion and occupation, have decimated Afghanistan's health care and food distribution systems.

Jawad Zarif asks the UN to prevent the use of hunger and disease as a weapon of war. His letter demonstrates the wreckage caused by many decades of United States imperialism and suggests revolutionary steps toward dismantling the United States war machine.

During the United States' 1991 "Desert Storm" war against Iraq, I was part of the Gulf Peace Team -- at first, living at in a "peace camp" set up near the Iraq-Saudi border and later, following our removal by Iraqi troops -- in a Baghdad hotel which formerly housed many journalists. Finding an abandoned typewriter, we melted a candle onto its rim, (the U.S. had destroyed Iraq's electrical stations, and most of the hotel rooms were pitch black). We compensated for an absent typewriter ribbon by placing a sheet of red carbon paper over our stationery. When Iraqi authorities realized we managed to type our document, they asked if we would type their letter to the Secretary General of the UN. (Iraq was so beleaguered even cabinet level officials lacked typewriter ribbons.) The letter to Javier Perez de Cuellar implored the UN to prevent the U.S. from bombing a road between Iraq and Jordan, the only way out for refugees and the only way in for humanitarian relief. Devastated by bombing and already bereft of supplies, Iraq was, in 1991, only one year into a deadly sanctions regime that lasted for 13 years before the U.S. began its full-scale invasion and occupation in 2003. Now, in 2020, Iraqis still suffering from impoverishment, displacement and war earnestly want the U.S. to practice self-distancing and leave their country.

Are we now living in a watershed time? An unstoppable, deadly virus ignores any borders the U.S. tries to reinforce or redraw. The United States military-industrial complex, with its massive arsenals and cruel capacity for siege, isn't relevant to "security" needs. Why should the U.S., at this crucial juncture, approach other countries with threat and force and presume a right to preserve global inequities? Such arrogance doesn't even ensure security for the United States military. If the U.S. further isolates and batters Iran, conditions will worsen in Afghanistan and United States troops stationed there will ultimately be at risk. The simple observation, "We are all part of one another," becomes acutely evident.

It's helpful to think of guidance from past leaders who faced wars and pandemics. The Spanish flu pandemic in 1918-19, coupled with the atrocities of World War I, killed 50 million worldwide, 675,000 in the U.S. Thousands of female nurses were on the "front lines," delivering health care. Among them were black nurses who not only risked their lives to practice the works of mercy but also fought discrimination and racism in their determination to serve. These brave women arduously paved a way for the first 18 black nurses to serve in the Army Nurse Corps and they provided "a small turning point in the continuing movement for health equity."

In the spring of 1919, Jane Addams and Alice Hamilton witnessed the effects of sanctions against Germany imposed by Allied forces after World War I. They observed "critical shortages of food, soap and medical supplies" and wrote indignantly about how children were being punished with starvation for "the sins of statesmen."

Starvation continued even after the blockade was finally lifted, that summer, with the signing of the Treaty of Versailles. Hamilton and Addams reported how the flu epidemic, exacerbated in its spread by starvation and post-war devastation, in turn disrupted the food supply. The two women argued a policy of sensible food distribution was necessary for both humanitarian and strategic reasons. "What was to be gained by starving more children?" bewildered German parents asked them.