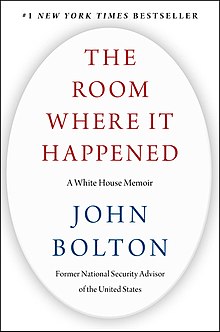 My ex-wife once told me that I never saw a bridge I didn't want to burn. That wasn't entirely true. But I do like to call things as I see them. Now it's John Bolton's turn to burn every bridge he's built or otherwise encountered in more than 30 years in Washington. His new book, The Room Where It Happened, is in bookstores now, and it's clear from a quick read that Bolton likes literally nobody. He apparently has never liked anybody. And he's perfectly happy to give you his side of the story.

First, don't buy this book. Don't do John Bolton the favor. Get it from the library if you feel truly compelled to read it. I can't legally tell you to read one of the many bootleg copies on the internet, but they're there as well. Second, I want to say on the record that I have always loathed John Bolton. When I was at the CIA, he was a constant thorn in our side. I never met any policymaker who so loved war that he was willing to jump into it with both feet as much as John Bolton. His hatred of foreign governments that did not line up with our own -- Iran, Iraq, Syria, Venezuela, and Cuba immediately come to mind -- was irrational. He wanted to fight even when there was no intelligence to show that the policy was a wise one. And don't forget that he was a draft dodger during the Vietnam War.

Political memoirs are a very important genre in Washington, DC. They have become wildly popular in the past couple of decades, as senior officials cash in at the end of their government service, get their side of modern history on the record, and then live happily ever after on their massive book advances. Everybody does it -- Democrats and Republicans alike. But those memoirs are usually vehicles for showing the writer as a statesman, as an historical figure living among us. Think of Robert Gates, Bill Clinton, George W. Bush, Hillary Clinton, Henry Kissinger, et al. Love them or hate them, Washington insiders will read, reread, and refer to these tomes for years to come. Not so with Bolton's.

Bolton's book is a political hit job on everybody who crossed him during his tenure in the Trump White House, but mostly on Trump. It's a mean-spirited poison pen that will likely preclude Bolton from working in any future White House. Bolton's stories are meant to demean those with whom he worked as not up to his intellectual level. Their policies were stupid or misguided. They lacked the kind of experience Bolton had in the upper echelons of government. Most of his ire, though is aimed at Trump. And these stories say more about John Bolton than about the targets of his complaints.

One thing is clear to the reader by the end of this book. John Bolton is no hero. He's not a truth-teller. He's not a whistleblower or a martyr. He's a jilted lover taking one last potshot at the partner who betrayed him. This is his revenge. It'll soon be forgotten.

Related Topic(s): Book Excerpt; John Bolton Warmonger; Memoir; Revenge; Trump, Add Tags
Add to My Group(s)
Go To Commenting
The views expressed herein are the sole responsibility of the author and do not necessarily reflect those of this website or its editors.