The zeal with which the American media digs into every nook and cranny of the Russiagate saga is all the more surprising that we have all been schooled in the principle that negotiations are preferable to war. Every history class that we have ever taken has conveyed the message that going to war is not an honorable way to solve problems. The villains in history have invariably been the great warriors, especially if they attacked others.

How far the United States has fallen from those lessons dispensed across the land to every child taught to salute the flag! Taught to sing the Star-Spangled Banner, tribute to a flag that remained standing when dawn broke on a battle. In the national anthem, we are the ones being attacked, by our mother country, that refuses to grant us independence. My own 'city of brotherly love' does not boast a 'pantheon' honoring the fallen, but a hall of independence that preserves the cracked bell that once called for freedom

How did we come to the point where we are today? Stewards of an earth threatened by climate change notwithstanding our engineering prowess, our attention is riveted to what is probably the most monumental inquiry the world has ever witnessed: To what extent did the President of a nuclear United States connive with the President of a nuclear Russia to gain the White House, where he would turn the country away from war and toward cooperation before it is too late? How did we get to the point where the most sophisticated minds think of nothing but ascertaining whether their president is guilty of crimes against war?

Is it our long lawyerly tradition, born perhaps of the early need to establish an unchallengeable rationale for demanding independence from Great Britain? That same Great Britain that drew up the Magna Carta in the year 1215, eight hundred years ago? Did that venerable parchment dictate that the English-speaking world would forever be devoted to litigation -- or at minimum, to investigation, to ferreting out the reasons for men's actions, the better to pass judgement on them?

When the French dumped their king it was also for freedom -- although it took another hundred years for that decision to be final, and that country still uses the Napolenic Legal Code. 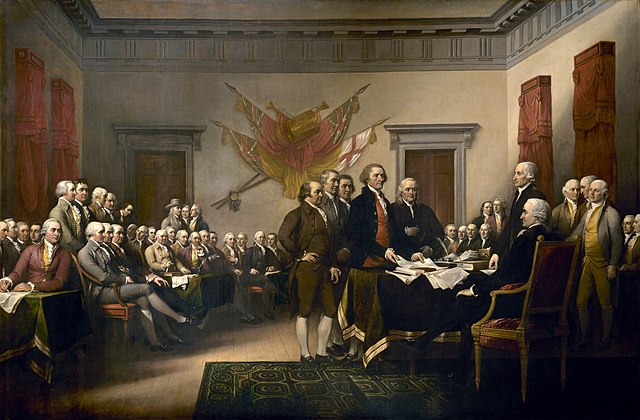 Declaration of Independence
(Image by (Not Known) Wikipedia (commons.wikimedia.org), Author: Author Not Given)   Details   Source   DMCA
.

Related Topic(s): Climate; Freedom; History; Independence; Investigation; Media; Russiagate; World, Add Tags
Add to My Group(s)
Go To Commenting
The views expressed herein are the sole responsibility of the author and do not necessarily reflect those of this website or its editors.