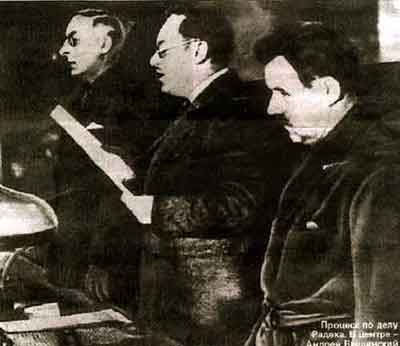 On May 31, a panel of three judges on the US Court of Appeals for the 2nd Circuit upheld the conviction and sentence of American political prisoner Ross Ulbricht.

It's been two years since I last devoted a column to Ulbricht's plight, so a refresher seems in order:

After a show trial so obviously fixed in advance that Stalin's pet prosecutor Andrey Vyshinsky would have blushed with embarrassment to participate in it, judge Katherine Forrest sentenced Ulbricht to life in prison without the possibility of parole for the crime of running a web site. Yes, really.

In theory, the issue was that the site, Silk Road, was used by buyers and sellers of illegal drugs. In fact, it was that someone calling himself "Dread Pirate Roberts" -- whom the prosecution alleged was Ross Ulbricht -- had created and operated an online marketplace in which business was conducted anonymously and beyond the reach of government regulators.

Forrest denied Ulbricht bail on the prosecution's claim that he had conspired to commit murder -- charges which were used to poison the jury pool and keep the defense from reviewing the state's evidence or vetting its witnesses until right before the trial began.

Forrest effectively forbade Ulbricht's attorneys to present a defense. The prosecution was allowed to present "evidence" while refusing to disclose how it gathered that evidence. The FBI's technical claims were admitted; expert witnesses to dispute those claims were excluded. The defense was forbidden to suggest alternate theories of the identity of "Dread Pirate Roberts." The prosecution withheld, until after the trial, the information that two of its own agents were on their way to prison for corrupt activities during, and bearing on, the investigation.

The polite language of procedural appeal in criminal cases is "reversible error" by the judge. But Katherine Forrest didn't fumble around and screw things up. She intentionally fixed the trial at every opportunity, for the express purpose of seeing Ross Ulbricht convicted of, and giving him the maximum possible sentence for, "crimes" for which he deserved not a day in prison even if he had in fact done the things he was accused of.

In any sane universe, Ross Ulbricht would be a free man and Katherine Forrest would be removed from the bench, disbarred, and sued down to her last dime for damages.

Hopefully, the legal saga isn't over and justice will eventually be served in higher courts or through presidential commutation of the unjust sentence.

Socially, these robed evil-doers deserve to be shunned by all good people. They shouldn't be able to get tables at restaurants or drinks at bars. Their clergy of choice should withhold communion until they repent and make restitution. We probably can't make their lives as miserable as they've made Ross Ulbricht's. But we should try.

Related Topic(s): Circuit Court Of Appeals; Political Prisoners; Ross Ulbricht, Add Tags
Add to My Group(s)
Go To Commenting
The views expressed herein are the sole responsibility of the author and do not necessarily reflect those of this website or its editors.