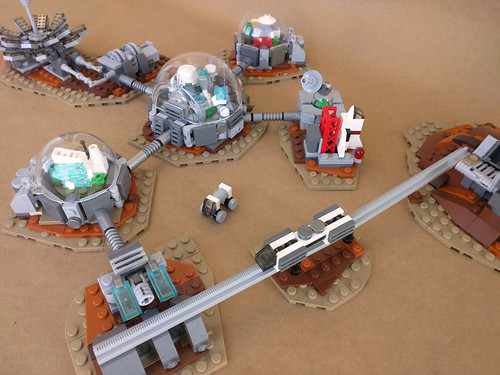 Recently I read an article in one of my favorite alternatives to the MSM, Business Insider, "Elon Musk and Jeff Bezos have profound visions for humanity's future in space. Here's how the billionaires' goals compare." As the title suggests, the two billionaires, when not f*cking around with gadgetry and automation and the realignment of democracy on Earth, have their minds entangled in ideas of space colonization and exploitation. The article details the differences in their goals and approach.

Elon Musk scares me. Something doesn't smell right. Maybe it's the pigs he's implanting mind control devices in that bothers me; the oinkers sh*tting themselves as Musk keeps their eyes open -- ala Clockwork Orange -- and forces them to watch the animated Animal Farm film and choose between Napoleon and Snowball. Fascism or Socialism. Supplementary feed is up for grabs. No time to wallow in the mud.

After watching that snippet, do you feel like having a banana smoothie? Bad enough the shite wants to mess with the porkers, but he reckons that humans will be ready for implants sometime next year. Check it out:

Can we have any doubt that he's mad? You'll be able to recognize these new age pig people by their snorkel sounds, of course, but also look for bald spots on top of their heads.

Musk will be looking for volunteers to get implants. *Sigh* It recalls the crazy thing that happened when he 'put it out there' that he was seeking people willing to strap into one of his rockets and go on a one-way trip to Mars. That's right, one-way. I almost lost my cookies when I read that 80,000 people signed up for the suicide mission. It disturbed me the way it does when I think that Americans have 400,000,000 guns at their disposal -- that's a lot of unprocessed anxiety waiting to explode. But it got worse, because I stopped counting one-wayers to Mars at that figure. However, a more recent tally indicates that 202,586 sorry souls put their hands up. WTF?

Jeff Bezos is another one. This guy. Don't get me started. It still stings that I gave up torrenting books and dutifully purchased Kindle books, grew a nifty little library that made me feel warm inside for words, only to discover that all those mofo books I "purchased" were actually rentals. I was leasing them. No notice. On their site the button says "Buy Now." But you're leasing them. I deleted my account to Amazon, thinking the heck with them, I have my library and won't "buy" more from them. But, no, it turns out my Kindle reader needs to sync with mother ship once in a while or the books become unopenable. I wrote about it. I was angry. Still am.

He followed that up by announcing he'd be working with the CIA (and other intels) to set up web services, which immediately called into question what he might do with Amazon buyer data. Would he turn off -- quite cooperatively -- the habits of lefties and dissidents? Then he tried to bury an ax in Hachette's head.

Then getting that Power rush, he went head to head with Pierre Omidyar in a bidding war for the purchase of The Washington Post. He won, and Omidyar settled for establishing The Intercept with Glenn Greenwald (and company). This battle between the two probably has future implications, besides news, as Omidyar owns eBay (and recently purchased Paypal), and is Amazon's main competition (most of A's sales are other-than-books). Bezos has a non-democratic mindset. Doesn't want to pay taxes, in exchange for jobs that people complain they are poorly treated at. During the recent Union stoush in Georgia, some workers were complaining that delivery drivers had to pee and poop in bottles and bags (presumably brown bags), insinuating that Bezos wasn't providing rest time.

And the fudrucker got even crazier rich during the current pandemic. He's so evil-seeming that I wouldn't put it past him if he - not the Chinese, as Rudy "Where Are My Keys?" Giuliani says - was responsible for the Covid-19 outbreak. I'm told by normally reliable sources that his ex-wife didn't particularly like him much either - his shlong wasn't as effective as he claimed it would be -- although, she signed a non-disclosure statement, so"