"Gangs of machete-wielding Muslims have been blamed for the weekend slaughter of hundreds of Christian villagers in Nigeria, but analysts say it would be wrong to assume the conflict was rooted in religion." 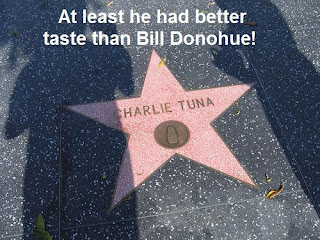 Remember Charlie the Tuna? He was the mascot for Starkist Tuna who was always trying to lure Starkist into thinking that he had "good taste" when a God-like voiceover said "Sorry Charlie, we're looking for tuna that tastes good." So twist that sentiment around the latest scream of "PERSECUTION!" that Bill Donohue of The Christian League is ratcheting up about 50 decibals. Twist it in another direction: we need to have Christians who have dignity, consideration and good taste. But Donohue exhibits the opposite. Consider his take on the same incident:

According to The Australian, "dozens of bodies lined the streets" of three Christian villages in northern Nigeria. "Other victims of the weekend's Muslim fury jammed a local morgue, the limbs of slaughtered children tangled in a grotesque mess." Children were scalped, "most had severed hands and feet," and "officials estimate that 500 people were massacred in night-time raids by rampaging Muslim gangs." According to one eyewitness media account, "They then set homes on fire and attacked men, women and children. Many were decapitated."

It was later found out that the attack could have been a response to a massacre in January of the Hausa Muslim Community resulting in 150 deaths. Christian mobs in Kuru Karama were said to blame.

Back to CNN. It cited an ugly Muslim-Christian incident in 2001 in the same area. What started the Muslim massacre back then? "A Christian woman had tried to cross the road through a group of Muslims during Friday prayers." Yeah, that'll do it every time.

It's time to stop viewing Muslim-Christian violence through the lens of moral equivalency. 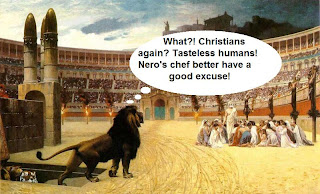 It's time for many proselytizing Christians to own up to the annihilation of so many millions of people in history. And the ones who scream about the supposed atheism of Hitler, Stalin and Pol Pot are usually the ones who disavow any knowledge of wrongdoing by Christians in history. Or at least chop history's witnesses down to a few Catholic heretics who minimally staged the auto de fes of a few thousand old women. They seldom mention Torquemada, and while we had to memorize "Columbus sailed the ocean blue in 1492" we never heard about forced conversions of the Moors and the Jews and ultimately the mass exile of those two populations by good Queen Isabella.

"Moral equivalency" may be the only true lens we have. CNN has better taste than to run down a gory list of atrocities. Their viewers are smart enough to envision the bloodletting without detail.

Bill Donohue, however, believes in shock and awe.

Rev. Dan Vojir is has been writing/blogging on religion and politics for the better part of ten years. A former radio talk show host (Strictly Books " Talk America Radio Network) and book publisher, Dan has connected with some of the most (more...)
Related Topic(s): Bill Donohue; Catholic; Christian Values; Christian-taliban; Cruelty; Media CNN; Media Progressive; Stalin; Tastelessness; The Catholic League, Add Tags
Add to My Group(s)
Go To Commenting
The views expressed herein are the sole responsibility of the author and do not necessarily reflect those of this website or its editors.