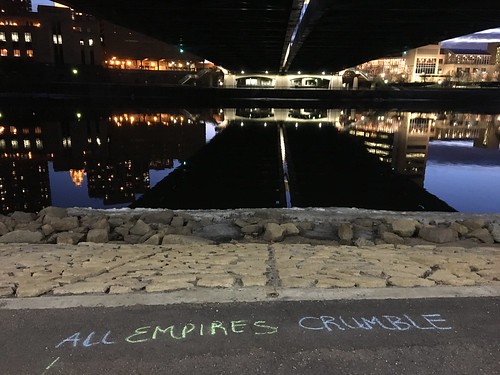 "Something's Coming", a song from West Side Story is about change, potential, and belief in a positive future. It contains a line, "I don't know what it is, but it is gonna be great". Although in the play that positive future is stopped by those who oppose change, one is left with a continuing belief in the unstoppable potential of a positive future, even after sacrifices.

That is where we find ourselves as a state and a nation and, perhaps, as a world. There is a great change coming, a mighty transition, but it has not yet taken form and still lacks the clarity necessary for people to understand and accept its potential for a positive and sustainable future.

It is like a vision waiting to be realized"a vision that, from our current perspective, might seem nearly impossible.

For a large part of my career I worked with people who felt stuck in their lives, unable to find ways to get unstuck. After working with them for a while, it became apparent to them that the issues that seemed to keep them stuck were more about how they viewed themselves, their lives and the issues. They inevitably found that if they looked at their issues from a slightly different perspective, possible solutions emerged. In their imagery, that new perspective did not require them to look at life from a 180-degreechange in perspective, but simply required a slight shift of vision, a small turn of the head.

The thing about perspective is that it only requires unlocking our vision from our usual perspective to see new worlds and new possibilities. That is why we have others review our work or act as a sounding board for our ideas"they provide a different perspective that can clarify and add depth to our ideas.

If you will not consider a change in perspective, you are left with limited options. Either you accept the reality offered by that perspective or you resist that version of reality. That means that you can simply resist it, go to war with it to destroy it, or find some other way to change it. Another radical option is to simply submit to that perceived reality and shut down a part of yourself. If at some time in the future you are forced to change your perspective you might discover that there were other options that would have used your time and energy more effectively and accomplished more change with less disaster.

It is time for a paradigm shift, moving away from a world in conflict about who will dominate and control life, and instead moving toward a more human and sustainable focus. Martin Luther King, Jr., used the quotation "The arc of the moral universe is long, but it bends toward justice. It is now a time to support the bending of that arc toward human justice.

As with any change, even with people beginning to see the world from a different perspective, we still have the old systems trying to prevent change and, in their death struggles, almost being willing to take the entire world down with them. This has been the case with dominant nations and with empires, often leaving destruction and ruin in the wake of their collapse. The old dies out and the new is still forming, still in its infancy and needing protection, support and nurturing. We are in the midst of difficult times. The world has seen similar times at the beginning of Christianity and the beginnings of this nation as an independent democracy, just to mention two examples.

So where do we find ourselves right now? The nation was left in a kind of political chaos after the last election. In Minnesota politics now, we also have chaos. The nation under new leadership is in its own chaos, not knowing from moment to moment what the latest perception of a threat might have in store for us and the nation itself.

As was clear in the last election, the traditional parties are no longer seen as relevant and have lost their power and influence. The traditional means of "doing politics" is also in flux. It is open to opportunity as well as being vulnerable to opportunists and manipulation.

Part of the problem is that nearly everyone still is searching for solutions within the framework of the old political paradigm, one that is dying as part of the old unworkable and irrelevant system.

The new paradigm requires that we let go and allow the old system to wither away while we shift our attention back to a humanizing paradigm based on democracy and the sacredness of human life and all life in our finite and interdependent world.

Related Topic(s): Courage; Democracy; Democratic; Energy; People; Perception; Transition, Add Tags
Add to My Group(s)
Go To Commenting
The views expressed herein are the sole responsibility of the author and do not necessarily reflect those of this website or its editors.