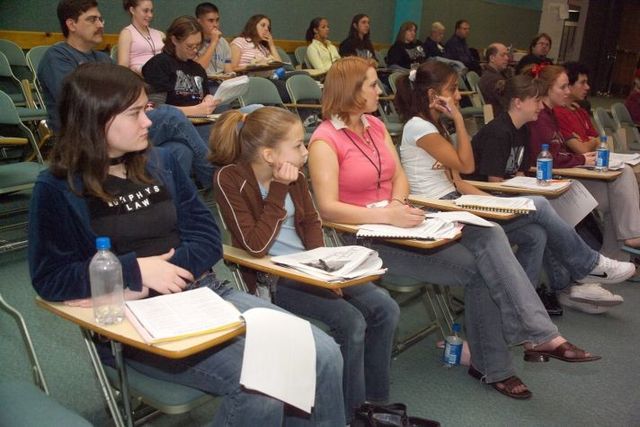 High school students
(Image by Wikipedia (commons.wikimedia.org), Author: Author Not Given)   Details   Source   DMCA
"More than 70% of high school students average less than 8 hours of sleep," according to an October 1 research letter in JAMA Pediatrics ("Dose-Dependent Associations Between Sleep Duration and Unsafe Behaviors Among US High School Students"), "falling short of the 8 to 10 hours that adolescents need for optimal health. Insufficient sleep negatively affects learning and development and acutely alters judgment, particularly among youths."

The letter doesn't venture any guesses as to why high school students in the one-size-fits-all government ("public") education system and private schools modeled on that system aren't getting enough sleep. Here are three clues:

According to the National Center for Education Statistics, the average length of the public school day (for 2007-2008 -- the most recent table I could find) is 6.64 hours.

Finally, according to a 2014 University of Phoenix/Harris poll of teachers, high school students take home an average of 3.5 hours of homework per night.

That's 10.14 hours per day spent on school, not counting morning grooming, travel time each way, or any extracurricular activities.

Or, to put it a different way, the average public high school student works a full 40-hour week plus 10.7 hours of overtime -- without pay, of course, and on a uniform schedule taking no heed of individual kids' natural sleep cycles.

If you're like me, you've probably worked some overtime in your career. And when working overtime on an extended basis, you've probably cut down on your sleep hours in favor of the other things that make life worth living.

Now, think about your teen years. What was important to you and how important was it? Dating, or at least trying to find a date? Music? Sports? How many times did you rush through dinner to be on time to an event, or just to get over to a friend's house for movie night?

When you were that age, everything was the most important thing ever, and it was important NOW NOW NOW. Except when you wanted to sleep in. Which was, admit it, every morning.

Is it any wonder our kids are tired? In a society that's over-protective of "childhood" in many ways, up to and including visits from social workers over letting kids play unattended or walk to school alone, we're working them on aggressively adult schedules instead of letting them listen to their bodies and get the rest they need.

The most obvious -- and best -- solution is to take your kids out of the "public" schools and homeschool them. On THEIR schedules, not someone else's. But not everyone can do that.

Shorter school days and later starts might help. Online schooling is a more flexible, and increasingly available, option. But those possibilities are mostly the prerogative of "education administration" bureaucrats.

One option does remain in parents' hands, though: Just say no to homework and make it stick. When you clock out at work, you're done for the day. When the final bell rings at school, your kids should be done too.

Related Topic(s): Health; Homework; School; Schools; Sleep, Add Tags
Add to My Group(s)
Go To Commenting
The views expressed herein are the sole responsibility of the author and do not necessarily reflect those of this website or its editors.