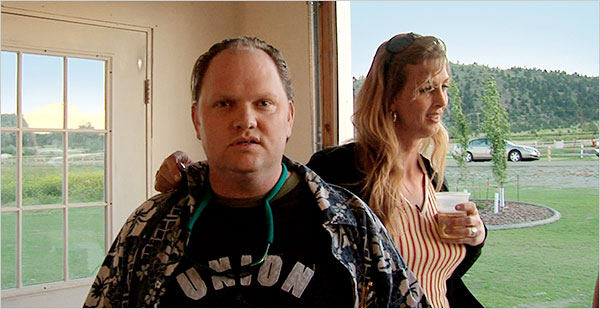 Kimberly Reed's cinematic family therapy memoir, "Prodigal Sons," details the transformation of her life as an unhappy male to a confident, attractive woman. Only her transgender journey isn't the film's focus.

Reed is such a confident, capable, appealing person - one who has taken such control of her life - that viewers are required to expend zero energy on feeling her pain. Even at her high school reunion in Montana, everyone accepts her for who she is (although one woman questions her lesbian relationship). Her old best friend, her co-star on the football team - her mother (Reed says her father, no longer alive, was totally supportive) - seem unconcerned about her life change.

All of the emotional energy in the film is drained by her relationship with her brother Marc, who was adopted into the same family just before Kimberly was born. She turned into a tall, smart, good-looking football star, while Marc was left back to be in the same class as Paul McKerrow, Kimberly's former self, where Marc suffered in every way by comparison.

On top of this, Marc - in his twenties - had a serious accident and brain surgery. Although he has a wife and beautiful child, Marc seems to have no other life sustaining activity. As a result - at the reunion and everywhere else in the film - he spends his time justifying himself and his life. The one schoolmate remembrance of Marc's time is Helena, and concerns his reneging on his obligations in re an accident with the other kid's car.

Thus it is Marc's story that is painful - especially when it forces him into rages directed at Kimberly. Marc barely seems to notice his sister was formerly his brother - other than recalling how Paul is related to his emotional scars. Marc is in the habit of pulling out a box of pictures of his family - because the family's success (a third brother is an architect) represents his greatest achievement. Since these contain photos of Paul, for once Kimberly is moved to chastise the fragile brother with whom she usually walks on shells - "Instead of pulling out 200 pictures when you meet someone, how about only using 190, and leaving the ones of me out?" (Typically, the experience causes the reflective Kimberly to realize she has to come to grips with her past.)

Into this mix, one of those events occurs that would be considered a wretched excess if it were fiction. In tracing his birth mother, Marc discovers that she was the daughter of Orson Welles and Rita Hayworth - then she died before he could meet her!!!! The filmmaker is more affected by the discovery than Marc, since Welles is a hero of hers. Kimberly eagerly accompanies Marc to Croatia where Welles' late-life partner, Oja Kodar, invites the brother. The event allows the brother temporarily to bask in the reflected glory of one of the world's great filmmakers, and otherwise seems to mean nothing to him. In one scene, Kimberly anxiously coaches Marc through an interview for a film about Welles.

And so Ms. Reed labors on trying to fix their relationship. I left before the end of the film when Ms Reed visits Marc in order to take a family truck back to her mother. Marc get it into his head late at night to fix the gas gauge, which was a crazy and impossible idea. Kimberly's overall competence would easily enable her to deal with the broken gauge on the long trip from Seattle to Montana, for which she intends to embark very early the next morning. As she firmly but gently insists on leaving, Marc goes totally off on one last (for me) frenzy of anger - you could hear Marc's rage in the lobby.

Psychologically, the one area where Marc - accidents notwithstanding - might be able to consider himself superior to Kimberly is with cars. Her discounting this expertise enrages a man who has so little in life.

And so - despite Kimberly's gender change, despite the Wellesian connection, despite the beauty of Montana and the general kindness and acceptance of virtually all of the people in the film - this excruciating movie drove me out of the theater.

Related Topic(s): Gender Bias; Gender Equality; Movies-Film; Reviews_ Movies; Transgender, Add Tags
Add to My Group(s)
Go To Commenting
The views expressed herein are the sole responsibility of the author and do not necessarily reflect those of this website or its editors.

Siblings are More Challenging than Gender Change - the Movie