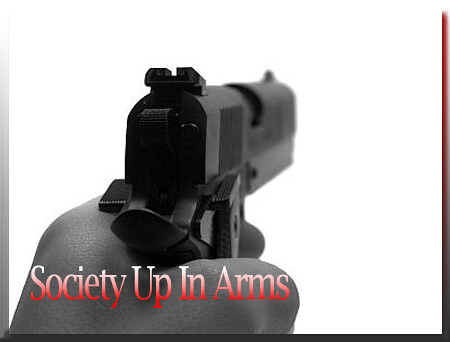 Once again, Americans are up in arms or perchance, better armed and dangerous. Only little more than a week into 2011, citizens have had to confront their fears, feelings, all at gunpoint. It began on a calm, clear Saturday. In a Safeway Store Tucson parking lot Congresswoman Gabrielle Giffords held one of her customary Congress on the Corner events. It was January 8, 2011. Friends and admirers from each political Party turned out. Suddenly, cordial chatter turned icy cold. gunshots shattered the calm. People were slaughtered. Some survived. However, as a nation, we were all wounded.

Retorts followed. Seemingly, a culture was changed, or was it? Just as has occurred, many times in the recent past, people quickly took sides. Blame was ballied about. Solutions were also presented. Some argued for stricter gun control laws. Others used the occasion to validate a need for less restrictive restraints on gun ownership. Persons who held a position similar to the most prominent victim proposed a need to protect themselves.

On January 14, 2011, Grand Old Party Representative, Louie Gohmer of Texas, Proposed a Bill that would allow members of Congress to carry guns on Capitol Hill. Days earlier, after the infamous Tucson, Arizona shooting, several congressmen vowed to keep the weaponry they already own closer to their chests. In light of the recent event in Congresswoman Gabrielle Giffords home District, one that cast a permanent dark shadow over the lives of many, Utah Representative Jason Chaffetz expressed his firm belief, it would be best to bring his Glock 23 with him when he meets with constituents. This long time gun-owner is not alone in his position. Other members of Congress chimed in.

Indeed, this distinctive stance is not solely a Republican posture. Heath Shuler, a Democrat from North Carolina, Vice-Chairman of the House Sportsmen's Caucus stated that he too would pack heat when on the city streets, even when he strolled the streets of a the highly secured Capitol. Steve Cohen, another Congressman who sits on the Democratic side of the aisle offered his reflection. "It's not that I'm going to be like Wyatt Earp," declared the Tennessee Representative. However, he noted, he would reapply for his permit to carry a concealed weapon.

Questioned about lawmakers' decision to take matters into their own hands, to carry concealed weapons, Terrance Gainer, the Senate's Sergeant-At-Arms and former Washington, District of Colombia Police Chief, offered his concern. Gainer told ABC's "Good Morning America," "I don't think it's a good idea," The "peace officer" avowed, ''I don't think introducing more guns into the situation is going to be helpful." Nonetheless, just as Educators did only a few years ago, Congresspersons stand strong against gun restraint.

Original - copyright 2006 Betsy L. Angert
School Shooting Safeguard; Arm Educators
In the last few weeks, [Fall of 2006], school shootings have dominated the news. The frequency of these seems to be increasing. People throughout the nation are panicking; what are we to do? President George W. Bush spoke of this situation in his Saturday, October 7, 2006, radio address. He proclaimed, "We will bring together teachers, parents, students, administrators, law enforcement officials, and other experts to discuss the best ways to keep violence out of our schools." Conferences have been called. The problem has been discussed for years.

President Bill Clinton convened such a forum in 1999. Educators, policy-makers, law enforcement officials, and adolescent-development specialists came to the Radcliffe Institute for Advanced Study on May 21, 2002. Each group was equally intent on investigating the causes and effects of Lethal School Violence. In the symposiums, experts sought solutions. Everyone wanted [and wants] to protect our progeny.

At the time, programs were initiated; yet, the violence continued. In the last month or more, we as a nation are wondering; is there no end? Will our children, our Educators, we, as a society, ever be safe?

Citizens again ask how can we secure our schools and shield our offspring from societal harm. Finally, an answer comes from a Wisconsin lawmaker. Representative Frank Lasee proposed that Teachers and Administrators carry guns daily and use these when necessary. "In the wake of school shootings in Wisconsin, Colorado, and Pennsylvania" he would "introduce legislation that would allow teachers, principals, administrators, and other school personnel to carry concealed weapons." At the time, the Republican Representative believed our communities will be safer if everyone were armed.

Unrelated To Gangs
We know that communities have long been concerned with gang violence. However, what has occurred in recent years differs. On January 29, 1979, individual outbursts came into our collective consciousness. According to the Indianapolis Star, "Brenda Spencer, 16, opened fire with a .22-caliber rifle at an elementary school across the street from her San Diego, California home. She killed two people and wounded seven because she 'didn't like Mondays.'"

Upon hearing this story, our country held its breath as it does now. Jointly we release a communal sigh. Still the violence increases as is evident in these last five weeks. There is talk. What measures can we take to guard against weaponry?

In 1994, the federal government began requiring school safety programs in an attempt to crack down on violence on school grounds. Many schools introduced metal detectors to check for guns, knifes and other weapons . . . although the Supreme Court eventually overturned the federal requirements, most school safety measures remained in place. In Los Angeles, California for instance, [as of 1997] all high schools still use some sort of metal detectors.

However, it is clear, these actions do not secure the premises. Zero tolerance campaigns were invoked. Violations are and were numerous.

Parents, administrators, teachers, and staff were told to observe student behaviors; they were asked to attend to warning signs. Discipline problems were considered predictors; yet, this was not always the case. Offenders did not only come from within the school system, they enter and exist throughout society. Witness the killings within the last month or more [before and during September 2006.]

Machines and Mandates
Whatever we choose to reflect upon, when looking at violence in our schools, our homes, or in our airports I ask us to bear in mind that traditional methods for preventing violence are not working. I think we must look at why people do what they do.

Violent crime continues to be a major problem and I suspect this will continue as long as we look for simple solutions. I observe, when we as a country, focus on machines and mandates as a means for deterring violence in schools and within society at-large, we ignore the violator. I believe the life of the perpetrator is most telling. This is the key component in a crime that can be influenced and altered. If we address it early enough and treat root causes sincerely and seriously we can make a difference.

I am an Educator, a student of life; I am an Author. On each path I learn from you and with you. Indeed. we all teach and study. Together we advance awareness and acumen. We learn, grow, and glow greater. Please peruse my prose at BeThink.org and (more...)
Related Topic(s): Arizona Massacre; Arizona Shootings; Civil Society; Congress; Cycles Of Violence; Giffords-Gabrielle; Humane Society; Rep Gabrielle Giffords; School Shootings; Shootings; (more...) Society-Culture-People; Terrorist Disasters; The Tragic Shooting In Tucson; Violence And Abuse; Violence-War, Add Tags  (less...)
Add to My Group(s)
Go To Commenting
The views expressed herein are the sole responsibility of the author and do not necessarily reflect those of this website or its editors.

Sex and the Super Bowl