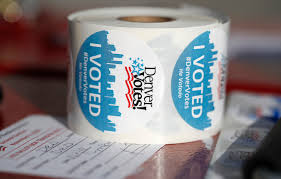 Ah, the best-laid plans of mice and men!

Like my previous article, this one will depart a bit from my original plans. Less drastically, however, since I still intend, as planned, to discuss the rhetoric of a truth-telling satyagraha "movement of movements" supporting a peaceful Green New Deal (GND). One designed to place relentless pressure on Joe Biden. (Assuming, of course, that we're lucky enough to elect Biden rather than Trump, who'll brutally repress all movement dissent.)

Deviating from my original writing plan, I'll focus here exclusively on movement rhetoric. I'll again defer discussing the risk movement members will take in uniting their individual aims under the big "umbrella" of a peaceful GND. Here again, my original plan was disrupted by important recent political reading--this time a piece by Rich Moser, a fellow political strategy blogger whose views I respect.

In his article. Moser makes an interesting parallel between our times and the abolitionist era, surmising that our times offer a political opportunity for a third party quite rare in U.S. history. I actually agree with Moser's third-party thesis, only to add that that opportunity--in direct terms--is emphatically not this election. Even as powerful a moral voice against our toxic duopoly as Chris Hedges has openly admitted that Trump is more dangerous than Biden. Much as I admire Hedges as "America's conscience," I find his People's Convention speech self-contradictory--and the quintessence of bad strategy.

Pace Hedges, I find voting for the Green Party in swing states dangerously and strategically self-defeating for Greens and Green supporters--among which I ardently count myself. (The Green Party deserves full credit for developing and promoting the GND--arguably humanity's only current salvation.)

But helping elect Trump--the GND's (and humanity's) worst imaginable enemy--will only aid the Democrat establishment's turbocharged propaganda machine in smearing the Green Party and making it even less electable. To say nothing of making peaceful street revolt in favor of the GND--under Trump's brutal fascist repression--an act of martyrdom. Hedges rightly admires martyrdom, and clearly possesses the moral courage to risk it himself. But to require it from potential movement activists is frankly unnecessary, stupid, and sure to steeply reduce your movement numbers.

I'm quite proud to have coined the best slogan explaining why we leftists must vote for Biden: "Make America Safe for Revolt." Especially since that revolt can clearly be framed in terms of a reality deeply favorable to Greens--Democrats' electoral extortion--this "shithole election" makes more obvious to voters than ever. (More soon on the potent rhetoric of "this shithole election.")

Readers will inevitably note a strong slant toward movement rhetoric here and in most of my other writings. While I'm admittedly personally attracted to rhetoric (my savvy college rhetoric prof thought I could make a fortunate in advertising), my emphasis on movement rhetoric is based not on personal talents but on political analysis. Lovers of the common good are fighting a desperate propaganda war. A war in which we're overwhelmingly outgunned in budget and media access terms; and, even worse, a propaganda war our earnest--and naive--political movements share the catastrophic disadvantage of not even knowing they're fighting.

If I offer anything of value (besides clever, well-thought-out rhetoric), it's the synthesis of connecting America's most valuable, public-interested political movements with the thinking of America's best leftist political analysts. Above all, with the brilliant, indispensable propaganda model of U.S. political discourse developed by Noam Chomsky and Edward Herman.

Now, one key feature of the propaganda model is the role mainstream media--like our politicians themselves--play in defining what's permissible for public discussion. The issues our major media and national politicians stress are the issues our governing elites want U.S. citizens to take seriously. Of course, the more greedy, corrupt, out of touch, and callous those elites become, the less the issues they want taken seriously will have anything to do with the well-being of most citizens. Or even with the distressing needs related to simple survival. Or even with the distressing needs related to everyone's survival. Our governing elites ' criminal neglect of humanity's climate emergency--outrageously enabled by media's own criminal neglect of that life-or-death issue--best illustrates this last point.

When a string of presidential debates can pass without a single question about climate change, or when billionaires can get vastly richer amidst record (pandemic-related) unemployment, the misrule of our governing elites has become a civilization-threatening tyranny. Here, the thought of eighteenth-century philosopher David Hume, who first studied the problem of how the few can govern the many, screams for our attention.

Hume recognized that as people's thinking becomes more democratic, governing by physical force becomes more and more illegitimate. So, savvy modern rulers govern primarily by the force of public opinion; be their governance good or bad, they gain consent to it in people's minds . By this insight, Hume paved the way for our modern understanding of propaganda; it's an unspoken tribute to Hume that Chomsky and Herman's groundbreaking book on U.S. media's propaganda role is titled Manufacturing Consent.

Related Topic(s): 2020 Elections; Climate; Extortion; Fascism; Fascist; GrassRoots; Green; Lesser Of Two Evils; Occupy; Propaganda; (more...) Revolution; Rhetoric; Satyagraha; Shithole; Strategy; Trump, Add Tags  (less...)
Add to My Group(s)
Go To Commenting
The views expressed herein are the sole responsibility of the author and do not necessarily reflect those of this website or its editors.