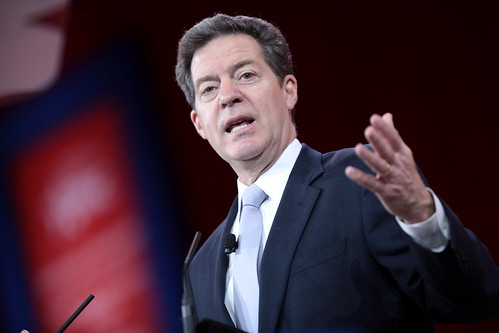 Former congressman, senator, and Kansas governor Sam Brownback, an evangelical Christian and extreme conservative, was confirmed by the Senate last week as the State Department's Ambassador-at-Large for Religious Freedom. The vote was 49-49, with Vice President Pence, himself a conservative evangelical Christian, breaking the tie. Right-wing Christian leaders praised the nomination and confirmation, saying that Brownback would work hard to protect Christian minorities in the Middle East and South Asia.

LGBTQ proponents pointed to Brownback's long history of opposition to gay rights as an example of hypocrisy and said that he would do nothing more than export the Trump administration's hate agenda. I think they're right. And I'll go one further. Brownback will do nothing to protect the rights of Shia Muslims in majority Sunni countries and vice versa. I believe that Brownback hates and fears Muslims. Look what he did in his own state of Kansas.

In 2012, when he was governor of Kansas, Brownback supported -- and signed into law -- a bill to ban Islamic law. Specifically, it forbade courts and state government agencies from using Islamic or other non-US laws when making decisions. (This was a non sequitor. No court or government agency in America uses Islamic law when making decisions. The bill was meant only to mollify those Kansans who hate people not like them -- white and Christian.)

Supporters of the law said that it would reassure "foreigners" (e.g., any Muslim, foreign or not) living in Kansas that the Constitution would protect them. Opponents said that it singled out Muslims for ridicule and was irrelevant anyway, because everybody is supposed to be protected equally under US law.

Sharia law has become a buzzword around the world. It conjures up images of beheadings, amputations, and radicals shouting "Allahu Akbar" while burning the American flag. Even Greece, a country as open and welcoming of other cultures and faiths as any, recently passed a law to limit Sharia because it was being used in the country's Islamic courts (which have jurisdiction among the country's Muslim minority in northern Greece) to discriminate against women in inheritance cases.

But what, exactly, is Sharia law? The word Sharia literally means a "road" or "path." In the religious context, it means a path to faith. (I speak Arabic and have a degree in Middle Eastern Studies, with a concentration in Islamic theology. I studied Islam under the noted theologian Sayyid Hossein Nasr.)

Traditional Islamic jurisprudence recognizes four bases for Sharia: the Quran, which Muslims believe is the literal word of God; the sunnah, which are the verbally transmitted teachings, deeds, and sayings of the Prophet Muhammad; qiyas, which is the process of deductive analogy in which the teachings of the Hadith (a collection of traditions based on the sayings of Muhammad) are compared with those of the Quran in order to apply a known injunction to a new circumstance, similar to the way US courts apply precedent; and ijma, which is judicial consensus, or a "meeting" of judicial minds.

Historically, Sharia was interpreted by independent judges, called "muftis," who issued rulings called "fatwahs." Since the middle of the 20th century, however, most Muslim countries have replaced the mufti system with a system of courts based on the European (primarily French) model. In almost all cases (with Saudi Arabia and Iran being the primary outliers), capital punishment such as stoning and beheading were banned, and criminal cases are heard in a civilian, non-religious court.

Almost every Muslim-majority country uses Sharia law only to settle issues of personal and family law: marriage, divorce, child support, inheritance, contracts, and property disputes. In some countries (Saudi Arabia, Iran, and Pakistan, for example), the Sharia court also handles cases of apostasy, but these are rare.

Islam does have its fundamentalist strain, just like Christianity and every other religion does. And some fundamentalist Muslim imams argue that Sharia should be the absolute law of the land. But that view has gained traction only in Afghanistan.

Two of the major complaints against Sharia are that it is inconsistent with Western views on universal human rights and with democratic governance. Indeed, most Muslim countries have rejected the Universal Declaration of Human Rights, instead recognizing the Cairo Declaration of Human Rights in Islam, drafted by the Organization of Islamic Cooperation, which, they say, calls for respect for both human rights and Muslim paternalistic hierarchy.

But in the United States, all of this is neither here nor there. Sharia law in the US is entirely community-based, and the structure of Sharia jurisprudence in the US is very similar to that exercised by the Rom, formerly known as "gypsies." That is, a plaintiff and a defendant will approach a Sharia court judge with their dispute, lay out the facts, and hear a decision. These are not issues of human rights, of apostasy or blasphemy. They are issues like Person A and Person B went into business together, the partnership fell apart, and they want to end it in accordance with Islamic law. Or Person A died and did not leave a will (which is very common among Muslim families). How is the property to be divided among the surviving family members?

There is no harm in allowing communities to settle their own disputes, based on their own beliefs, when it doesn't impinge on anyone's human, civil, or constitutional rights. Live and let live. But Sam Brownback's hateful ideology does impinge on individual freedoms. He and people like him have no right to interfere with anybody's religious beliefs as long as they do not harm anyone. Kansas' anti-Sharia law, and others like it in North Carolina, Oklahoma, Louisiana, South Dakota, and Tennessee, are paperwork exercises that have no impact in real life outside their clearly and narrowly-defined communities.

Sam Brownback's interference, and the interference of others like him, will result only in further misunderstanding, distrust, and hatred. That's not what our country needs. And it's not what an American ambassador should do.

Related Topic(s): Evangelical; Hate-Racism-Bigotry; Inconsistent; Muslims; Sam Brownback; Sharia, Add Tags
Add to My Group(s)
Go To Commenting
The views expressed herein are the sole responsibility of the author and do not necessarily reflect those of this website or its editors.