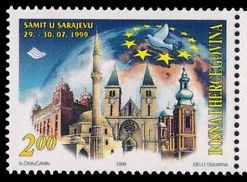 She arrived in the region in January 1993, and began a mission active until 1996, after the Dayton Accords, which she described as "what was supposed to peace but wasn't." (This acute observation should be known to the world, as Putinite efforts to revive Serbian fascism persist today.)

With teams that journeyed back and forth from the war zones, she travelled from Zagreb, the besieged Croatian capital, to the Croatian city of Split, and then into Hercegovina, visiting Mostar and Jablanica, before going to the environs of Sarajevo and to Tuzla in central Bosnia.

As it happens, I know beautiful Jablanica well, having informally interviewed victims of the Serbian sex terror there. Jablanica became the base of one of the crisis intervention teams Dr. Young directed.

Her work included relief to female rape victims, as well as men interned and tortured in prisons and concentration camps. She heard many terrible stories.

Women were often reluctant to discuss what they had undergone, a phenomenon observable throughout the world.

Victims included soldiers who saw their comrades killed. Bosniaks and Croats in Hercegovina were both under Serbian attack.

Dr. Young and her colleagues met with as many as 300 victims, including children as young as three. Her group cooperated with the International Criminal Tribunal for Former Yugoslavia (ICTY) at The Hague, although the testimony they collected was not associated with a specific proceeding.

These genuine humanitarian angels concentrated on providing victims with a sense of safety, so they could deal better with what had befallen them.

The documentation they sent to The Hague included art produced by child victims, depicting Bosnian life before and after the Serbian invasion. The kids drew pictures to express their feelings. These represented life before the war started: happy homes in which they lived; and after it began. The after pictures showed bombs falling, parachuted troops, dead men on the ground and most poignant: drooping flowers, emblematic of the effects of war.

Many women saw their male family members killed before their eyes. One woman related how the Serbian terrorist who attacked her home was a lifelong neighbor with whom the woman and her husband had maintained a friendship since childhood. The neighbor and his companions killed her husband in front of her and proceeded to rape her dozens of times.

Swept away with Russian-financed propaganda, ethnic polarization, and "toxic masculinity," Serbian forces pillaged her village and murdered many of the men before taking survivors to prison camp or rape camps.

Dr. Young did not receive testimony on a topic about which I reported, the Serbian rape of men, but was struck by the horrors of Serbian torture. One former prisoner reported that he was not only starved and beaten but subjected to a nighttime terror over days of time. He was dragged to a dark room each night to have his teeth pulled one at a time.

Hearing that episode, I wondered of the object of the mistreatment might have been a Bosniak notable, whom the Serbs sought to dissuade from voicing opinions. But as recounted by Dr. Young, the victim was an ordinary person swept up in the Serbian terror.

The burden of hearing such reports was often difficult for members of the crisis intervention teams. Local translators had to be trained in responding to victims' stories and contending with their own traumatic reactions to them.

Victims of fascist oppression need desperately to be heard; to regain the sense of themselves they had before their dehumanization.

Stephen "Lu" Schwartz (Ashk Sylejman) is Executive Director of the Center for Islamic Pluralism, an international media network, and Founder of the Second Bektashi Sufi Mission to America. He has published more than 33 books and has pursued a (more...)

Related Topic(s): Sex; Sex Crimes; Terrorism, Add Tags
Add to My Group(s)
Go To Commenting
The views expressed herein are the sole responsibility of the author and do not necessarily reflect those of this website or its editors.

Greece and the Srebrenica Massacre

Sex Terror During the War In Bosnia-Hercegovina