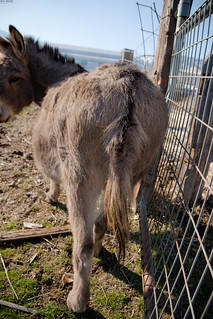 Perhaps a better example of the Donkey Logo of the Democrats-- a donkey's ass.
(Image by Orin Zebest)   Details   DMCA
>
1- You want to feel less guilty about how screwed up the USA is. Voting Democratic doesn't make hardly any difference, but you've convinced yourself that it does.
2-It's the Liberal thing to do.
3- You like a president who orders thousands of killings by drones
4- You support a president who has prosecuted more Whistleblowers than all other presidents combined
5- Chronically, repeatedly, maybe for your whole life, you've been okay with voting for lesser of two evils candidates-- candidates hand-picked and funded by the Democratic party.
6- Rationalization is so easy with Democratic candidates
7- Privacy is so yesterday-- and Obama loves to make the guys at the NSA and CIA feel like they're doing meaningful work.
8- You support ruining the lives of heroes like Edward Snowden, Julian Assange, Chelsea Manning and other whistleblowers-- even the ones who are not convicted, like Thomas Drake and William Binney.
9-- You are okay with the worst assault on press freedoms and journalists in recent history by a Democratic president-- which has led to the U SA being rated number 49 for press freedom ranking by Reporters without borders.
10- You are comfortable, maybe even like the fact that the Democrat controlled Department of Justice has done nothing to prosecute criminal bankers or police who kill or chronically engage in racist policies of policing.
11- You are comfortable with electing politicians who take your vote and your $10, $25 or $100 or $200 donations and then give total loyalty to lobbyists and corporations. How about those progressive democrats who signed off on a promise to require a public option in the health care bill. Didn't work so well, eh?
12- it feels like you're vote actually makes a difference. I know you're thinking about the supreme court. And yet, when a whistleblower won an appeal to the supreme court, one of Obama's appointees voted against the seven justices who awarded him.
13- Voting Democratic makes you feel you are better than Republicans.
14- You approve of hundreds of thousands of people in jail, mostly people of color, because they used marijuana-- for example, Democratic National Chairwoman Debra Wasserman Schultz opposed Florida's medical marijuana initiative. We'll see how the Democrats in the house respond to bills being submitted this year to eliminate federal laws against marijuana, so state laws can prevail.
15- You've developed amnesia for the reality that it was Bill Clinton who set the US on the path of signing on to trade bills that betray the interests of the 99%-- like NAFTA and CAFTA, and that Clinton also signed the order repealing the Glass Steagall act.
16- You're okay with a rapacious health care that enriches Pharmaceutical, hospital and medical device companies, while bankrupting millions and preventing millions from getting the health care they need.
17- You're good with gutting public education and laws that prevent teachers from doing their jobs, all so education can be privatized for the profits of hedge fund managers.
Considering the readership here, I focused on Democrats, but most of the items on this list could also apply to Republicans. There's only one party in DC-- the corporatist party.
Here's a thought. In ancient Athens, prostitutes had to wear clothing with flowers and their clients were not allowed to speak in public. Wouldn't it be great if we did that with lobbyists, corporate leaders who sent lobbyists to do their bidding politicians who were bought by lobbyists?

Related Topic(s): Democratic Sellout, Add Tags
Add to My Group(s)
Go To Commenting
The views expressed herein are the sole responsibility of the author and do not necessarily reflect those of this website or its editors.