This classic exchange from Stanley Kubrick's masterpiece, 2001: A Space Odyssey, epitomizes the risks of a self-aware artificial intelligence.

People who tell us not to worry about the existential threat of super-smart artificial intelligence or Artificial General Intelligence (AGI) often argue that however brilliant AI agents--such as deep learning programs or autonomous robots--become at specific tasks, they'll inevitably lack the general, all-purpose kind of intelligence humans have. Without that high-level understanding of oneself, the world, and one's place in it, those soothing voices say, AI is and will remain a safe and helpful technology; just another tool like a laptop or a smartphone.

I'd like to believe in the lovely AI-enhanced future AI enthusiasts envision, but I keep coming across flaws in their shiny picture. One, that just came to my attention today, is that robots are becoming self aware. That brings them one step closer to becoming truly autonomous agents, not just eager-to-please tools with a Swiss-Army-knife-full of potentially superhuman skills, but entities with minds and goals of their own, like HAL. 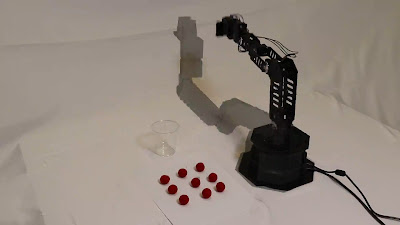 The latest research along this line comes from Hod Lipson, director of the Creative Machines Lab at Columbia University and graduate student Robert Kwiatkowski. They built an articulated robot arm with four degrees of freedom, allowing it to rotate, bend and grasp in a huge number of different ways. The arm was controlled by a deep-learning computer network. Deep learning networks mimic the human brain in being able to learn from experience, and are the basis of many of today's most powerful AI applications, such as Google's AlphaZero, which in the course of just one day of "play" became the world champion in chess, Shogi and Go.

Initially the arm's deep learning network--in effect its brain--had no idea of the size, shape or structure of the arm, nor of the ways it could move. However, much like a baby babbling as it learns to speak, the system made thousands of random motions from which it gradually created an accurate internal model of itself. What looks like a distorted shadow in the picture above is an overlay of the arm's model of itself early in its learning process. After 35 hours of practice, the system developed a very accurate self model. In the picture below, you can see how closely the shadowy overlay tracks the actual arm. 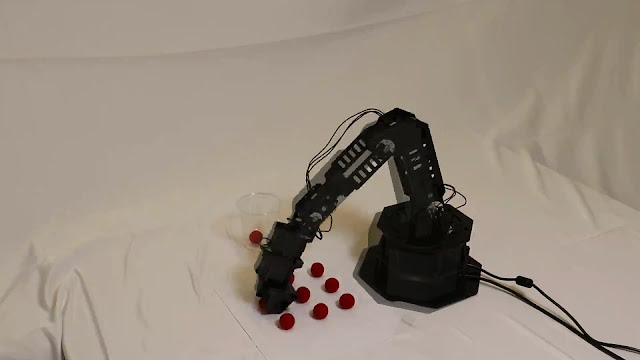 Once the robot arm's brain had an accurate self image, it could very quickly learn how to perform any number of specific tasks. In the video above, you can watch the arm pick up balls and place them in a container, and also print words.

And, much like a person learning to perform a familiar task under unusual circumstances, for example eating with one arm in a cast, the robot rapidly modified its self image when the experimenters substituted a longer, bent piece for one segment of the arm.

Until now, the authors explain, human programmers had to spell out a robot's size, shape, and potential movements in order for it to function. "But if we want robots to become independent, to adapt quickly to scenarios unforeseen by their creators," says Lipson, "then it's essential that they learn to simulate themselves."

The researchers also suspect that having a self image able to plan and execute a multiplicity of tasks may represent a crucial step in human development. "We believe that this separation of self and task may also have been the origin of self awareness in humans," they write.

It may seem like a long way from a robot arm generating an accurate self image to a high-functioning, seemingly self aware AI like HAL. However, the pace of development in AI is dazzlingly fast and only getting faster. It may not take many iterations before Siri or your Google Assistant isn't just a chatty interface with an amazing collection of knowledge and skills, but a self aware entity, potentially with a mind of its own.


You can read the paper by Lipson and Kwiatkowskyhere.

Related Topic(s): Artificial Intelligence; Chess; Future; Robotization; Robots; Self; Self-awareness, Add Tags
Add to My Group(s)
Go To Commenting
The views expressed herein are the sole responsibility of the author and do not necessarily reflect those of this website or its editors.

STAY IN THE KNOW
If you've enjoyed this, sign up for our daily or weekly newsletter to get lots of great progressive content.
Series: "Artificial Intelligence"