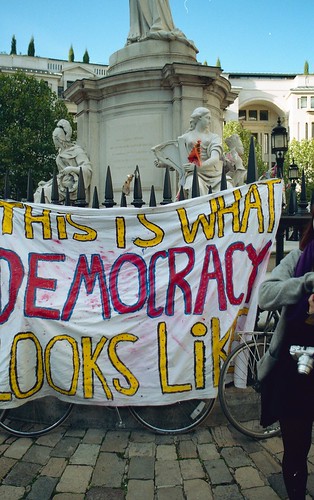 The entire argument for democracy is about self-determination. What makes it so unique is the idea that a group of people can make their own decisions about what is the best direction and process to keep their society healthy and thriving for everyone.

This process of a social group making democratic and participatory decisions has worked historically in small groups but the idea that a larger group of people could chart a wise course for their own future was quite radical when it was suggested as a workable form of governance for the newborn United States of America at the end of the 18th Century.

The 18th Century had been a time of intellectual ideas and idealism in Europe focusing on the innate ability of humans to make wise decisions for themselves without having a paternalistic leader to guide them. It was also a time when the newly independent American colonies wanted nothing more to do with the hierarchical system of monarchy with its innate abuses of individuals and human rights in general. However, the millennia of top-down leadership and decision-making was so entrenched with its many justifications as well as its arguments about why ordinary people were not capable of self-governance; lack of education, lack of intelligence, lack of self-control, lack of social consciousness/self-centeredness as well as the old standbys, wrong religion, wrong race, wrong ethnicity; that change looked incredibly difficult. In other words, only those who were already making the top-down decisions were capable of such enormous responsibility.

After centuries and millennia of hierarchical domination by rulers with any number of justifications for their power, it looked to many people like it was simply meant to be. But those who lived their lives outside of that inner group of power saw the exploitation and abuse that went with that power. They also saw that those in power did not appreciate life and the realities of ordinary people and often made inappropriate decisions due to lack of first-hand information. Common people saw that they were capable of making every-day decisions to survive and they knew they formed their own effective communities and organizations all the time and had learned to cooperate to survive.

Another element was that the ruling elites were very afraid of what might happen if those people who they had exploited for so long were given power to make decisions. They could easily imagine what might happen with the release of the pent-up frustration of years of abuse and the threat it may create to their wealth, property, status and their very lives. They were very afraid of the transition of power and so, wanted to avoid anything that even suggested such a thing.

But the value of people having a voice in the direction and quality of their own lives became so apparent to so many, that the eventual rise of self-determination and democracy became inevitable, unless those in power could prevent that power from rising. Thus, we have the development of authoritarian power structures. Those democratic urges would simply be suppressed and exterminated by force and with fear and repressive institutions. If the authoritarian leadership controlled all the levers of power, democracy became almost impossible.

However, the human spirit cannot be quenched even by such methods, since it lives within the heart of every ordinary human being and continues to burn to light the way to the incredible human energy that is now being wasted.

Related Topic(s): Decision-making; Democracy; Democracy Awakening; Democracy In Action; Exploitation; Future; Governance; Independent; Leader; Monarchy; (more...) Responsibility; Rights; Self-determination, Add Tags  (less...)
Add to My Group(s)
Go To Commenting
The views expressed herein are the sole responsibility of the author and do not necessarily reflect those of this website or its editors.