"I'd love to suspend all the board rules for one year"

Despite the fact that Los Angeles Unified School District (LAUSD) Board Member Nick Melvoin has still not held a single public meeting for his secret rules committee, another vote was scheduled Tuesday for the full board to ratify its work product. Like on the two other occasions that these proposed changes came before the board, action on them was postponed to a future meeting. However, brand new board member Jackie Goldberg was able to persuade a majority of the board to approve a subsection of these rules. In protest of his entire package being pushed aside, Melvoin voted against the very rules that he had helped to craft.

Without input from the public that Melvoin has been elected to represent, it is not surprising that his proposed rules changes would not do anything to make meetings more accessible to the public. While most other neighboring schools districts hold their meetings when school is not in session, the LAUSD will continue to hold theirs during times when teachers, students and a majority of working parents cannot attend. After public complaints, the attempt to reduce the speaking time for members of the public continues to be abandoned. However, the rule that allows board members to ask questions of members of the public or to make clarifying statements during public comment remains slated for elimination. This lack of interaction would significantly reduce the impact of the public's voice.

Of the six changes brought to a vote by Goldberg's replacement motion, four were procedural and needed to be in effect before next week's annual meeting is held. The fifth makes changes to comply with the change in the Los Angeles City charter that moved board member elections from May in odd-numbered years to the general elections that are held to elect the President and Governor. The last change is a repudiation of the decisions by Ref Rodriguez and Monica Garcia to eliminate committees that dealt with issues such as special education. Under the new rule, the power to create committees is removed from the Board President and given instead to a vote of the entire board.

Under Goldberg's original proposal, the rest of Melvoin's proposals would have been discarded. However, against the request of Board Secretariat Jefferson Crain, she accepted Melvoin's request for a friendly amendment and allowed the changes to be considered again at a meeting in August. Melvoin did not return the favor and instead voted against the motion along with Garcia.

With Melvoin's secret committee still convened, there is still time for him to comply with the Brown Act and hold future meetings in a public forum with an agenda that is published beforehand. The public input he obtains might help him make the changes needed to finally obtain the vote that he needs to complete his two-year-long project. With three strikes against him, it should be obvious to him that he needs to do something different. 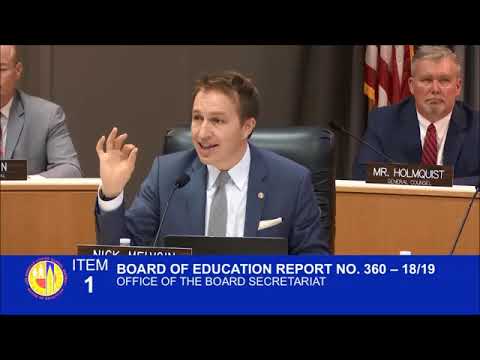 (Image by KLCS)   Details   DMCA
Carl Petersen is a parent and special education advocate, elected member of the Northridge East Neighborhood Council and was a Green Party candidate in LAUSD's District 2 School Board race. During the campaign, he was endorsed by Network for Public Education (NPE) Action and Dr. Diane Ravitch called him a "strong supporter of public schools." His past blogs can be found at www.ChangeTheLAUSD.com. Opinions are his own.