"Do not let them get away with saying this is not about free-market competition. This isn't about equity, this is about bringing free markets into the public sphere." - Denver School Board Member On Student-Centered Funding

Los Angeles
(Image by Kevin M. Gill)   Details   DMCA
Los Angeles County is a "Sea of Blue" with the number of registered Democrats far ahead of all other party registrations. Last November, Los Angelenos heavily favored Joe Biden, choosing him over Donald Trump 71.0% to 26.9%. The vote against recalling Gavin Newsom was equally as lopsided, with 70.8% of the voters in the county voting "no." John Lee was the only Republican on the City Council until he defected from the party. With such overwhelming support of the moderates of the Democratic party, how did the LAUSD end up represented by a majority that promotes right-wing education policies?

While the public's attention was focused on dealing with the COVID-19 crisis, the school district's Superintendent, Austin Beutner, was busy instituting the insultingly named "Student-Centered Funding" method of budgeting. This new method would have taxpayer money follow the student, rewarding schools that shortchanged students with Special Education or other needs. It is a form of school vouchers, a concept that was rejected by a margin of two to one by California voters in 1993. 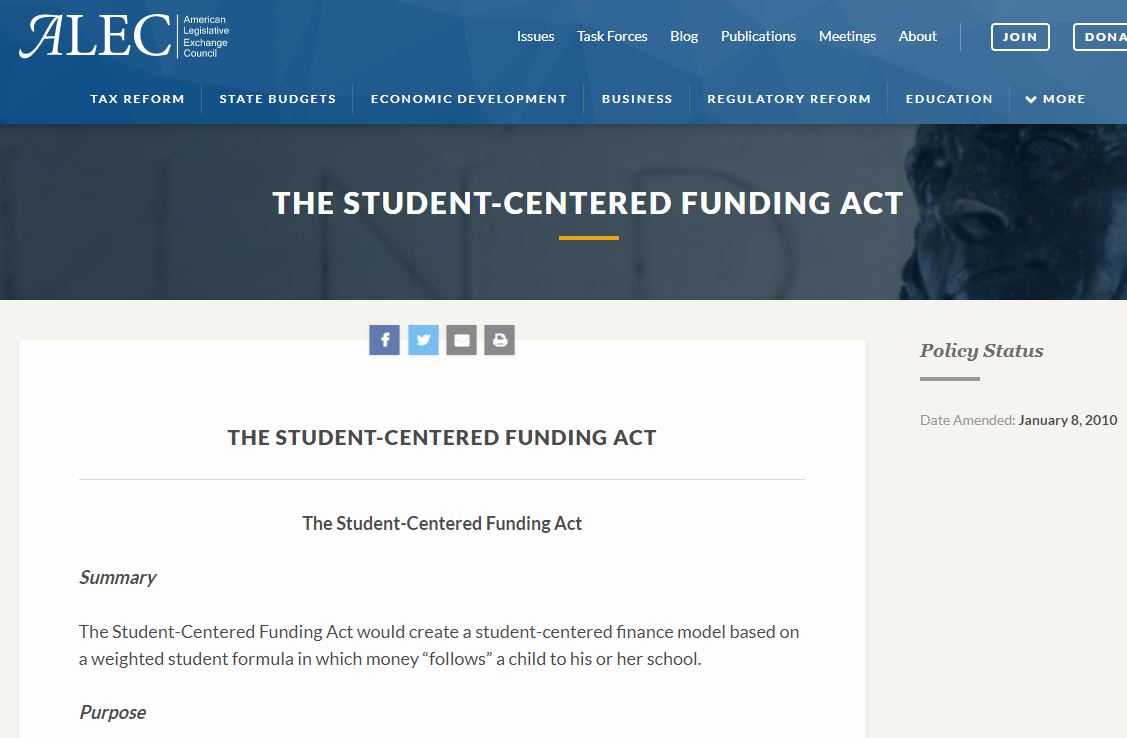 (Image by American Legilative Exchange Council)   Details   DMCA
SCF is a concept that comes directly from the American Legislative Exchange Council (ALEC). This is a conservative think-tank that supplies pre-written bills for passage by legislatures. The far-right legislation it has promoted includes bills that "undermine environmental regulations and deny climate change, support school privatization, undercut health care reform, defund unions and limit their political influence, restrain legislatures' abilities to raise revenue through taxes, mandate strict election laws that disenfranchise voters, and increase incarceration to benefit the private prison industry." Their latest success stories include laws that suppress voting and outlaw the teaching of anything resembling Critical Race Theory. Its efforts are funded in part by Charles Koch and the Freedomworks Foundation, a Tea Party-affiliated activist group.

Promoting policies thought up in a right-wing think tank is not the first time District representatives have followed the agenda of extremist conservatives. Instead of representing the BIPOC communities that make up a majority of LAUSD students, Nick Melvoin backed privileged white parents on the West Side who demanded that school campuses be forced to open in the midst of a global pandemic. This put him on the same side as a COVID-19 denier, "right-wing shill" Dr. Drew Pinsky.

(Image by Los Angeles City Ethics Commission)   Details   DMCA
The question of how the district's governing board was able to move so far to the right can be answered with one word: money. The majority of the LAUSD Board was elected with millions of dollars in campaign funds from the California Charter School Association (CCSA), a group that is rooted in the right-wing goal of privatizing government services. The push to make Los Angeles the center of "#CharterNation" has drawn political donations from the Waltons, heirs of the Walmart fortune, libertarian Reed Hastings and Doris Fisher, who uses her Gap fortune to expand KIPP charter schools. Among the donors to Kelly Gonez's campaign is Andres Rubalcava, the Area Director of Hobby Lobby. This is the same company that fought for the right to exclude birth control from their employees' health care coverage.

Right-wing forces had help from some unlikely allies in distributing this money. Despite the CCSA's clear stance against unions, SEIU's Local 99 has assisted the charter school lobbying group in legally laundering $25,000 so that Monica Garcia appeared to have support from labor.(1) The California Democratic Party was also a participant in this scheme receiving $150,000 from CCSA Advocates.

As school districts throughout the country deal with an onslaught from the right on issues like Critical Race Theory and vaccine mandates, the LAUSD should be leading the way, illustrating what a school system should look like in a blue city. Instead, the current board majority has allowed the right-wing to create a district that promotes publicly funded private schools, re-segregation, and school vouchers. Voters can stop this slide to the right by voting out the incumbents up for re-election next year. Nick Melvoin and Kelly Gonez should pay a political price for pandering to the right.

"Carl Petersen is a parent advocate for students with special education needs and public education. He is an elected member of the Northridge East Neighborhood Council and serves as the Education Chair. As a Green Party candidate in LAUSD's District 2 School Board race, he was endorsed by Network for Public Education (NPE) Action. Dr. Diane Ravitch has called him "a valiant fighter for public schools in Los Angeles." For links to his blogs, please visit www.ChangeTheLAUSD.com. Opinions are his own.

Related Topic(s): Occupy Los Angeles, Add Tags
Add to My Group(s)
Go To Commenting
The views expressed herein are the sole responsibility of the author and do not necessarily reflect those of this website or its editors.