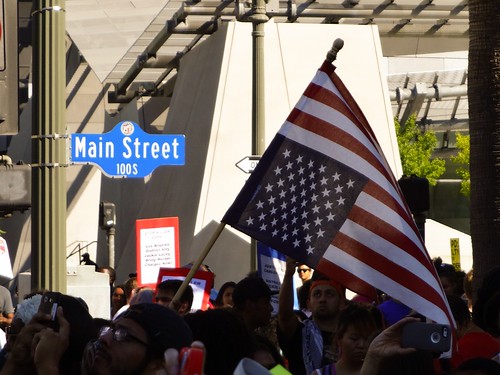 Emerging from a long stretch of social media push back, I've been thinking about something more permanent. How might we create an "umbrella" frame that would bring it all together in a form all of us can use? As Naomi Klein has shown, a key part of the "shock doctrine" is overwhelming the victim with an all-points attack on everything, all at once. Bush tried it on Iraq and now it's happening here. Our biggest Achilles heel is our M.O. of picking specific issues to defend. It is vital to resist each new outrage, but this tendency means the GOP is still dividing us. Despite the boost we just got from Democratic victories, we must keep on strengthening our hand.

Since Trump's Inauguration, progressive leaders have made a number of suggestions for stopping our losses. First out of the gate, of course, was Indivisible, with its legislative resistance strategy. Timothy Snyder's On Tyranny was high profile right away too, with its twenty warning lessons from the past. Then came Naomi Klein's new book, No is Not Enough, urging us to create a bold new vision of the American Dream, and The Resistance Handbook, by Markos Moulitsas and Michael Huttner. Of particular note in that book is the suggestion that we should "be patriotic:" wear a flag pin or carry a flag, because we represent the true American values. More recently Van Jones published Beyond the Messy Truth: How We Came Apart, and how We can Come Together. Van offers excellent advice about refraining from partisanship and looking for practical ways we Americans can start working together again. For starters, he spells out "a few areas of common purpose."

Yet there is still, for many of us, no matter how active we are in the "resistance," an ongoing, near paralyzing sense of shock and horror. We're watching the GOP roll out their carefully prepared one-party government plan to completely destroy the America we knew--deeply flawed as it was but still retaining the potential to improve. Having a long list (or even Van's short list) of things to do about it all, combined with the equally long list of daily outrages, can lead us right back to our usual silo mentality. .Talk about "intersectionality" doesn't really fix this problem either. Even if you can get a large number of issues/constituencies under one umbrella, the term "intersectional" can make it seem abstract and complex. (Even if your audience knows what the abstract, multisyllabic Latinate term "intersectionality" means!)

For the coalition approach to succeed fully today, we need an umbrella frame that can express everything we are trying to defend. It should also include from whom, followed by what we want instead. That's why I'm suggesting we use versions of "Stop the GOP war on America:-----------." (or variants of it--see below) to describe the overall assault we're experiencing.(1) It brings together in one short phrase all of the damage we need to stop and reverse. Put a positive reference to your own outrage of choice or the one du jour in the blank after the colon. Then both parts of the frame can work like the "zipper song" familiar to American folk music fans. For example, "Stop the GOP war on America: (protect, bring back, restore --fill in the blank with your own issue and policies.)" or "Stop the GOP war American values: make America well again--pass the bipartisan Alexander-Murray ACA fix!" or "Stop the GOP war on American workers: keep tax deductions that help people save!" Tying specific issues to their attack on all of the best American values will help unite us in opposing their agenda. It may also help us clear our heads, so we can rise above any confusion, despair, and paralysis we may experience on a daily basis.

It's true that this frame is extremely partisan. Some may feel the audience for it is too narrow or alienating. But I think this frame can reach a growing number of "ordinary Americans:" all the people who didn't vote for Trump, those Trump voters who now have buyer's remorse, and even some traditional conservative Republicans. After all, Trump and the current version of the GOP are increasingly anathema to folks who agree with Corker, Flake, and McCain. Yes, I know that roughly 80% of Republican voters still support Trump. But we "ordinary Americans" are the real majority. Trump is a minority president, and Congress a minority body. GOP gerrymandering, vote suppression, and out of date institutions like the Electoral College have guaranteed that.

So you see this is getting to be a lot of Americans. But if you like, you could use some variant of the main frame to reach unhappy Republicans: for example "Stop the Alt- GOP War on America: -------." Few voters of any kind are likely to agree with the Alt-GOP/Trump idea that a fascist government is what America needs. That would be a complete betrayal of our best American values: freedom, equality of opportunity, democracy, the right to vote, fairness and human rights, rule of law, honesty in government, being innovative, trying new things, making progress, moving forward into a new future (not looking back), being safe, clean, healthy (having our water, air, and soil be that way too), and moral in a universal way.

But what about the fact that so-called "American values" haven't been all that great throughout the history of our country? After all, we've had slavery, white supremacy, American tribal genocide, rampant vampire capitalism, arrogant exceptionalism and discrimination of every kind. Then there's wanton destruction/pollution of our air, water, soil, food, and so on. Yes, that's all part of American history and "culture." As we see today, with the rise of Trump and the Alt- GOP, some Americans still hold views that fuel these shameful actions. But these are not the "best American values" I mentioned above, the traits that make up the "ideal American identity story." That "American ideal" reflects an aspiration, a lodestar to which progressive reformers have successfully pointed throughout our history. It's that American dream we must work to protect, restore, and reinvent now, better than ever.