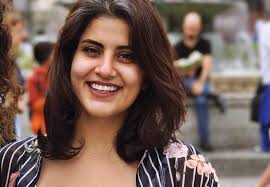 Loujain al-Hathloul (pictured above) fights for women's rights in her home nation of Saudi Arabia. Saudi Arabia is a Sunni Muslim nation. Islam, like all of the Abrahamic man-made "revealed" religions, is very misogynistic. Islam goes a brutal step further than the other Abrahamic "revealed" religions of Judaism, Christianity and Mormonism in its misogyny. In Islam's "holy" book/Word of God, the Quran, it is claimed that God commanded Muslim men who fear an inferior woman may become rebellious towards the superior man, to scourge the woman (Quran 4:34). The complete verse states:

Loujain al-Hathloul started a two-week hunger strike on October 26th, in protest of being tortured and not being allowed to see her parents. Today she was in court regarding her ridiculous charges of being a national-security threat. The court today decided to transfer her case to the Specialized Criminal Court, so she will have future court dates. The SCC is known for being a kangaroo court used to smash dissenters with lengthy prison sentences and even death sentences, which include execution by crucifixion and beheading.

In Islamic nations religion and government are closely intertwined. This is due to the Islamic nations not having something comparable to the European Enlightenment and the American Revolution. The Enlightenment spurred questioning of Christianity and the Bible. This helped to establish Deism, which was promoted by Enlightenment figures such as Voltaire and Rousseau. This in turn unshackled the minds of many American colonists from belief in Christianity and the Christian Bible. Leaders such as Benjamin Franklin, George Washington, Thomas Paine and Thomas Jefferson, who were influenced by the Deism of the Enlightenment, began to openly speak out against the ungodly connection of religion and government. This gave birth to the American Revolution, which in turn gave birth to a separation of religion from government. If something similar to the European Enlightenment and the American Revolution had also happened in an Islamic nation, there would no longer be the repressive and anti-reason Islamic regimes imprisoning freethinkers like Loujain al-Hathloul.

Deism is making inroads into Islamic nations. The Islamic nation of Turkey is seeing a rise in Deism, which has government/religious leaders concerned. The World Union of Deists has intro to Deism pages in Turkish, Arabic and Farsi in efforts to reach people currently under the influence of Islam with liberating and progress promoting Deism. Deists in Muslim nations run the same risks as Deists and other freethinkers did in Christian Europe, who faced torture and execution for their beliefs (the last person murdered by the Spanish Inquisition was the Deist Cayetano Ripoll, who was hanged on July 26, 1826, for being a Deist and for teaching other people about Deism).

Bob Johnson is a paralegal and a freelance writer in Florida. He was raised Roman Catholic, but after reading Thomas Paine's The Age of Reason, he became a Deist. In 1993 he founded the World Union of Deists and in 1996 he launched the first web (more...)
Related Topic(s): Change; Deism; Freedom; God; Misogyny; Muslim; Muslims; Quran; Rights Of Nature; Sunni; (more...) Thinking; Women; Women Equal Rights; Women In Activism Protest; Women Leaders; Womens Rights, Add Tags  (less...)
Add to My Group(s)
Go To Commenting
The views expressed herein are the sole responsibility of the author and do not necessarily reflect those of this website or its editors.