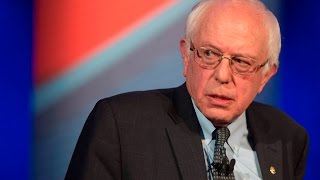 Sen. Bernie Sanders (I-Vt.) told Jake Tapper on CNN's State of the Union Sunday that he will "absolutely" introduce legislation on single-payer healthcare now that the Senate GOP's bill to repeal ObamaCare has failed.

"If people don't like the private insurance that they're getting, they should have a Medicare-type public option available in every state in this country," Sanders said

Asked if he would follow through on his pledge to submit single-payer legislation, Sanders said, "Of course we are, we're tweaking the final points of the bill and we're figuring out how we can mount a national campaign to bring people together...

"We are the only major country on Earth not to guarantee health care to all people," Sanders said, "We should ... move in the direction of every other major country...

"I believe at the end of the day, the American people will conclude that Medicare for all -- Medicare is working now for people 65 or older -- let's expand it to everyone."

commondreams.org is a progressive publisher
Related Topic(s): Health Care Universal - Single Payer; Healthcare; Legislation; Medicare, Add Tags
Add to My Group(s)
Go To Commenting
The views expressed herein are the sole responsibility of the author and do not necessarily reflect those of this website or its editors.