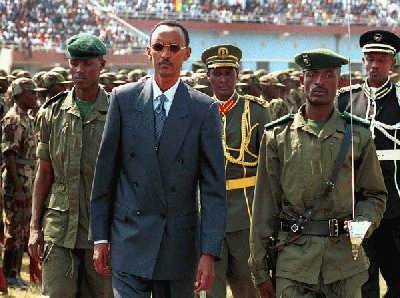 (Image by Unknown Owner)   Details   DMCA
Rwandan President Paul Kagame now questions the fairness of the International Criminal Court, and, says that most people who organized the Rwanda Genocide are outside Rwanda's borders.
On September 21, 2009, the Associated Press published "Kagame: Rwanda and Congo are making very good progress toward peace in conflict-wracked region." At first, this seemed like a standard corporate press reproduction of a U.S. State Department release championing their puppet, Rwandan President Paul Kagame, and the so-called peace process that they engineered to maintain control of the vast, geostrategic resources of D.R. Congo. But then AP reporter Edith M. Lederer, quoted Kagame himself:
"Genocide in Rwanda "” the causes of it are not Rwandan, are not African. The genocide has its roots somewhere else."
Lederer went on to say that:
"Without naming any individuals or countries, Kagame said most people who organized the genocide were outside Rwanda's borders, yet none have been held accountable. . . . The Rwandan leader questioned the fairness of the International Criminal Court, (ICC), the world's first permanent war crimes tribunal, saying it is widely seen as targeting Africans, developing countries or weak countries and not dispensing justice equitably on a global basis."
(How very true, though Kagame failed to point to the ICC's recent indictment of Omar al-Bashir, the sitting head of state of Sudan, a nation hostile to U.S. and its allies' interests, with immense oil reserves now being tapped by Chinese corporations.)
Nevertheless, Kagame begins to sound very much like Africa and human rights investigator/reporter Keith Harmon Snow, who has also characterized the ICC as a court for "African fall guys," dictators, and human rights criminals who have outlived their usefulness to the U.S. and its allies, and/or, have become liabilities, because so many other Africans have testified to their crimes. The trials of African fall guys, at the ICC in the Hague, reinforce the morality of Euro-justice, without mention of the foreign manipulations that Kagame alluded to.
It sounds as though Kagame now fears becoming another African fall guy, despite receiving Bill Clinton's Global Citizen Award, on September 24, 2009, and Reverend Rick Warren's International Medal of Peace award, on September 25, 2009.
Last year Rick Warren presented his first International Medal of Peace award to George Bush, and I don't think we should take either of Kagame's recent awards any more literally than that, or than the countless environmental stewardship awards that Exxon-Mobil, Peabody Coal, Chevron, Lafarge, ADM, Monsanto, and other multinational miscreants present to one another in year round ceremonies.
Kagame might be indirectly attempting to protect himself by protecting his partner in crime, former "General" Laurent Nkunda, who was arrested by a joint Congolese-Rwandan force on January 22, 2009. If Nkunda were brought before the ICC, he might well start talking about Kagame, and, if Kagame were brought before the ICC, he might well start talking about Bill Clinton and other members of the U.S. State Department, military, and national security apparatus.
Would anyone listen? Most likely not, but Kagame seems to be warning, "without naming individuals or countries," that, should he one day find himself on trial in the Hague, he would start "naming names and countries," "outside Rwanda's borders," who organized and benefited from the 1994 bloodbath.