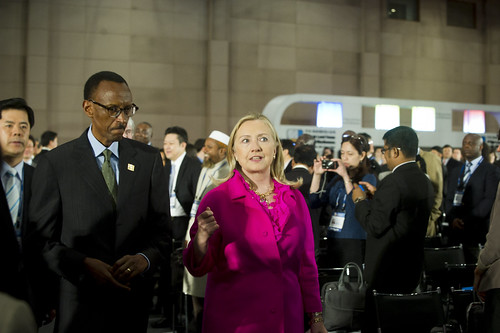 "Rwanda remains the poorest country in East Africa, except for Burundi."

On November 18 Rwandan President Paul Kagame inducted eight thieves without borders and one medical doctor into his "National Order of Outstanding Friendship, " presenting them with medals for "exemplary service" to the nation, meaning himself and his ruling party, the Rwandan Patriotic Front (RPF). Kagame is a modern day exemplar of French King Louis XIV's theory of government: "L'e'tat, c'est moi." His list of honorees showcases the skill sets that keep any neocolonial kleptocracy in business. Agility with shell companies and offshore accounts is highly valued, and a boundlessly self-righteous sense of entitlement is absolutely required. As with all things Kagame, connection to the Clintons and the Clinton Foundation are an added plus.

Here's some of what's known about the Kagame Nine:

1, Hezi Bezalel, Israeli businessman and Rwanda's Honorary Consul in Israel. Kagame's newspaper, The New Times of Rwanda, praises Bezalel for building ties between Israel and Rwanda over the years, and says that "he arrived [in Rwanda] in the middle of 1994, a time when most international figures turned away." Hard to know just what that could mean because on July 27, 1994, after Kagame had won the war that led to the massacres, the New York Timesran the headline U.S. IS CONSIDERING A BASE IN RWANDA FOR RELIEF TEAMS , and reported that:

"The United States is preparing to send troops to help establish a large base in Rwanda to bolster the relief effort in the devastated African nation, Administration officials said today.

"Setting up a staging area in the capital, Kigali, would mark an important new phase, committing American troops in Rwanda for the first time. Military officials said 2,000 to 3,000 troops could be sent into Rwanda, in addition to the 4,000 that Washington has said would join relief efforts outside the country."

Relief efforts are sort of like "evacuating embassy personnel"--always a good excuse for sending troops. But whatever, maybe Hezi Bezalel arrived a few weeks before the US troops, more precisely at the midpoint of 1994.

In "Sex, Guns and Big Bucks ," the Israeli outlet Haaretz describes Bezalel in the context of his bid for the license to become Israel's sixth mobile phone operator:

"Bezalel made his fortune in Africa, including through arms dealing. Bezalel represented Israeli defense companies in various African countries and reaped profits from the fees he charged. His associates say he worked only with governments, not with rebel groups. Now he wants to make himself into a legitimate businessman in Israel."

"Bezalel made his fortune in Africa, including through arms dealing."

"The Palestinian Authority (PA)'s draft resolution calling for Israel to withdraw from Judea-Samariafailed in a UN Security Council voteTuesday night - and an Israeli businessman may have contributed to the resolution being shelved.

"Businessman Hezi Bezalel has been working in the past few weeks behind the scenes to ensure that the draft resolution would fail to gain crucial support, Arutz Sheva has learned Wednesday.

Related Topic(s): Clinton Campaign; Clinton Presidental Library; Genocide; Israel; Neocolonialism, Add Tags
Add to My Group(s)
Go To Commenting
The views expressed herein are the sole responsibility of the author and do not necessarily reflect those of this website or its editors.