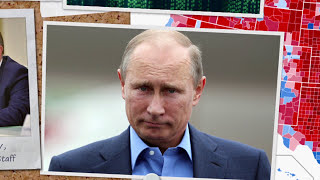 Russiagate originated in a conspiracy between the military/security complex, the Clinton-controlled Democratic National Committee, and the liberal/progressive/left. The goal of the military/security complex is to protect its out-sized budget and power by preventing President Trump from normalizing relations with Russia. Hillary and the DNC want to explain away their election loss by blaming a Trump/Putin conspiracy to steal the election. The liberal/progressive/left want Trump driven from office.

As the presstitutes are aligned with the military/security complex, Hillary and the DNC, and the liberal/progressive/left, the Russiagate orchestration is a powerful conspiracy against the president of the United States and the "deplorables" who elected him. Nevertheless, the Russiagate Conspiracy has fallen apart and has now been turned against its originators.

Despite the determination of the CIA and FBI to get Trump, these powerful and unaccountable police state agencies have been unable to present any evidence of the Trump/Putin conspiracy against Hillary. As William Binney, the former high level National Security Agency official who devised the spy program has stated, if there was any evidence of a Trump/Putin conspiracy to steal the US presidential election, the NSA would most certainly have it.

So where is the evidence? Why after one year and a half and a special prosecutor whose assignment is to get Trump has no evidence whatsoever been found of the Trump/Putin conspiracy? The obvious answer is that no such conspiracy ever existed. The only conspiracy is the one against Trump.

This has now become completely apparent. Russiagate originated in a fake "Trump dossier" invented by Christopher Steele, a former British MI6 intelligence officer. It is not yet clear whether it was the DNC, the CIA, or the FBI who paid Steele for the fake dossier. Perhaps he sold it to all three.
What we do know is that the FBI used what it knew to be a fake dossier to go to the FISA court for a warrant to spy on Trump.

As a consequence both Comey and the FBI, special prosecutor Mueller, and Christopher Steele are in hot water. The Chairman of the US Senate Judiciary Committee, Senator Grassley, has instructed the US Attorney General to launch a criminal investigation of Steele for false statements to FBI counterintelligence officials.

You can see where this leads as former FBI director Comey is a participant in the Russiagate attack on President Trump. To protect himself Steele will have to rat on who put him up to it. If President Trump had any sense, he would put Steele under protective custody, as his life is clearly in danger. If the CIA and the FBI don't get him, the Clintons surely will.

Consequently, all of a sudden in Washington facts count. Not all facts, just those relating to the Steele dossier. Be sure you listen closely and carefully to these two videos of US Representative Jim Jordan's destruction of US Deputy Attorney General Rosenstein for sitting on his ass while a totally corrupt FBI attempted to destroy the elected president of the United States. Keep in mind that Rosenstein is a member of the Trump administration. Why does the President of the United States employ people out to destroy him?

For videos, see here and here.

Here are 18 questions asked by US Rep. Jim Jordan:

1) Did the FBI pay Christopher Steele, author of the dossier?

2) Was the dossier the basis for securing FISA warrants to spy on Americans? And why won't the FBI show Congress the FISA application?

3) When did the FBI get the complete dossier and who gave it to them? Dossier author Christopher Steele? Fusion GPS? Clinton campaign/DNC? Sen. McCain's staffer?

Related Topic(s): Conspiracy; Corruption; Democrats; Media; Russiagate, Add Tags
Add to My Group(s)
Go To Commenting
The views expressed herein are the sole responsibility of the author and do not necessarily reflect those of this website or its editors.