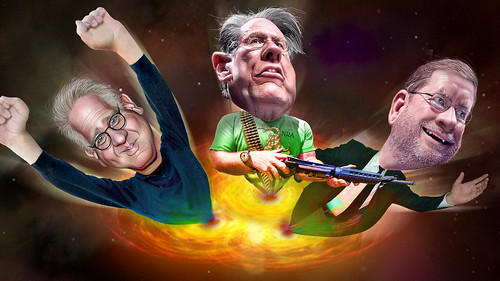 David Brooks of the NY Times and Jennifer Rubin of the Washington Post, both conservative columnists, have written recently on the glaring ethical void in present day Washington.

Brooks calls it a "Moral Vacuum in the House of Trump." Ms. Rubin goes a bit further with "The GOP's moral rot is the problem, not Donald Trump Jr."

Well, I have a few words from my own experience to add to these excellent observations by these two respected columnists. And I start with, why is anyone surprised?

I spent 45 years of my life in corporations, and here's the proof I offer for the authenticity of my comments: You don't last 45 years if you don't know the rules of the game.

And the main rule--I emphasize--the superordinate, overriding law, is 'the higher you go, the righter you are." You read that correctly, when you arrive at the peak of the pyramid, you are infallible. Of course, in public corporations, this only lasts until you begin to disappoint your board of directors. Then you are asked to resign, usually, with a multi-million dollar out-package, you negotiated before you took the job.

So even when you fail, you still succeed and that breeds a kind of arrogance that permeates the C-suite [1] of every corporation. That arrogance has an insidious side effect that we now see clearly demonstrated by the Trump Klan and reflected in the current GOP. These folks not only don't think the rules apply to them, but they're also not even aware of what the rules are. To put a sharper point on it, I doubt the younger Trumps even know there are rules.

Here's the big reveal. When you get to hang out with the folks at the top, you soon discover they have a disdain for the rules. From something as mundane as smoking in no smoking areas to something as serious as hiding liabilities with off-book accounting practices, the rules don't apply to them.

Forty-five years of experiences are just too many to detail in a short article, but in general, I learned the "winners" live by a general principle, "there is no rule that I need to heed unless it benefits me."

I know this is a generalization and there are honest and decent people at the top of some corporations. But I also know the temptation to modify one's interpretation of the rules becomes almost irresistible when the pressure is on to perform, and the rewards are very enticing, i.e., you get to keep your job and enjoy piles of money and benefits.

The real issue here is the system has developed a type of amoralism that rewards those who stand to gain from it for conforming to a kind of non-conformance. In other words, those who can appear to be conforming to the internal moral codes of the organization and at the same time be breaking all the rules are the winners. Of course, this means there are losers too. Sound familiar?

So, I don't think the people at the top, the "winners," are inherently bad. They are the ones who learn how to comply with the unwritten rules of the corporate world and ignore the rest. And increasingly more and more each year, those corporate rules demand actions that violate the common good for the benefit of the few. This doesn't mean a whole lot to the average person on the street until it begins to infiltrate the government.

And the shenanigans being pulled by this latest gang that call themselves the GOP and the entire administration is a good example of what to expect when the corporate takeover of government is complete.

So, every day now we get to answer the question, can a business executive run the government. How do you like what you see?

Related Topic(s): Arrogance; Business; Columnist; Corporate; Corporations; Government, Add Tags
Add to My Group(s)
Go To Commenting
The views expressed herein are the sole responsibility of the author and do not necessarily reflect those of this website or its editors.