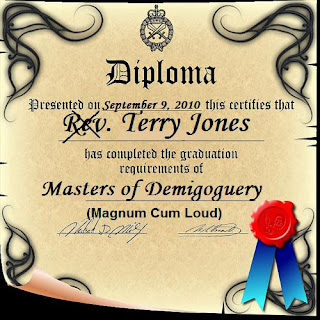 He Got What He Wanted From Taking

In Demagoguery And Publicity

UPDATE (2:15PM - PDT) The Reverend Terry Jones has just called off his "International Burn A Koran Day". Millions of people are relieved. Now, of course, pundits and preachers will keep him in the news for at least the next several days. Until he comes up with another "stunt" (as the President called it).

UPDATE (7:15pm - PDT) The "stunt" might be on again, so Jones is saying that it has been "suspended." It seems that he assumed he would be flown over to New York for a confab with Imam Feisal Abdul Rauf. He assumed wrong.

The analysis of this "stunt" should begin with comparisons to that master of insult and public outrage, Fed Phelps. And the parallels of Rev. Terry Jones To Fred Phelps are, well, scary: it's already been documented that Jones is, in a way, a student of Phelps. And now that his exploits in Germany have become national news fodder, Jones has the same international cache of a religious martinet and demigod that Phelps has cultivated all these years. And some say the pupil might have outdistanced his trainer:

Civil War-mustachioed Florida preacher man Terry Jones backed off his plans to burn the Islamic religious text on Saturday. So, after calling out Jones for stealing their church's 2008 attention-grabbing ploy, Phelps-Roper and her kin are picking up where Jones left off. "The false prophet Terry Jones caved--like all false prophets do, and like we told you he would," Phelps-Roper bragged.

Some might argue that Jones still has a way to go in emulating Phelps, but let's face it: Jones definitely got what he wanted - PUBLICITY. For better or worse, his number of followers has grown exponentially and some are even calling him a "hero." He's solidified his base.

He'll probably get a book deal.

So what are some of the rules/advisories that Jones cadged from Phelps? I've laid out the obvious ones.

From The Manual Of Phelpsian Publicity:

1. Plan an outrageously insulting event, like book burning or protesting at military funerals.

2. Make people angry enough for them to do most of the publicity work for you. Having religious leaders scorn you is OK, but get some celebrities, too. Angelina Jolie, for example.

Rev. Dan Vojir is has been writing/blogging on religion and politics for the better part of ten years. A former radio talk show host (Strictly Books " Talk America Radio Network) and book publisher, Dan has connected with some of the most (more...)
Related Topic(s): Book Burning; Hate-Racism-Bigotry; Publicity; Quran; Religious Extremism; Religious Hypocrisy; Terry Jones, Add Tags
Add to My Group(s)
Go To Commenting
The views expressed herein are the sole responsibility of the author and do not necessarily reflect those of this website or its editors.