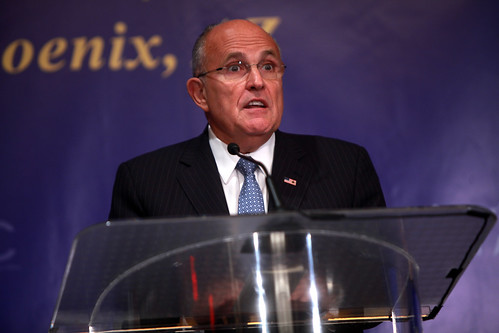 At Donald Trump's now-notorious press conference on Tuesday, lost amidst his threats to news organizations and denunciations of his enemies, the president-elect claimed he would soon assemble "some of the greatest computer minds anywhere in the world" to tackle the US government's cybersecurity problem. On Thursday, he went the opposite route instead and hired Rudy Giuliani.

Giuliani, Trump election surrogate and the disgraced former mayor of New York, is apparently going to head up Trump's efforts to coordinate "cybersecurity" issues between the federal government and the private sector, the transition team announced Tuesday. But what does Giuliani, last seen on the campaign trail claiming the president can break whatever law he likes in a time of war, know about cybersecurity? From the look and sound of it, not much.

Giuliani does head a consulting firm in New York called Giuliani Partners that supposedly focuses on cybersecurity, but Vice's Motherboard reported yesterday, it's tough to tell what they actually do, and it's even tougher to tell what Giuliani does for them, besides being the face of the operation while saying outrageous things on television.

As Motherboard's Jason Koebler and Lorenzo Franceschi-Bicchierai wrote, "Unlike many other cybersecurity firms, Giuliani Partners does not publish white papers about malware and large-scale hacks, or push for increased adoption of encryption, which would enhance cybersecurity across the board. In fact, it doesn't talk much about cybersecurity at all, instead choosing to focus on its more traditional anti-crime consulting work."

Just after the Trump team's announcement, security experts took a look at Giuliani Partner's website and started mercilessly mocking it on Twitter for glaring vulnerabilities and its own lax cybersecurity practices that makes it looks more like a website built in the mid 1990s than a supposedly respected cybersecurity firm would present the public today.

I mean, check out robots.txt or http://www. giulianisecurity.com/administrator/- you could just spawn a remote shell on that. # facepalm

Related Topic(s): Cybersecurity; Giuliani Rudy; Hackers, Add Tags
Add to My Group(s)
Go To Commenting
The views expressed herein are the sole responsibility of the author and do not necessarily reflect those of this website or its editors.