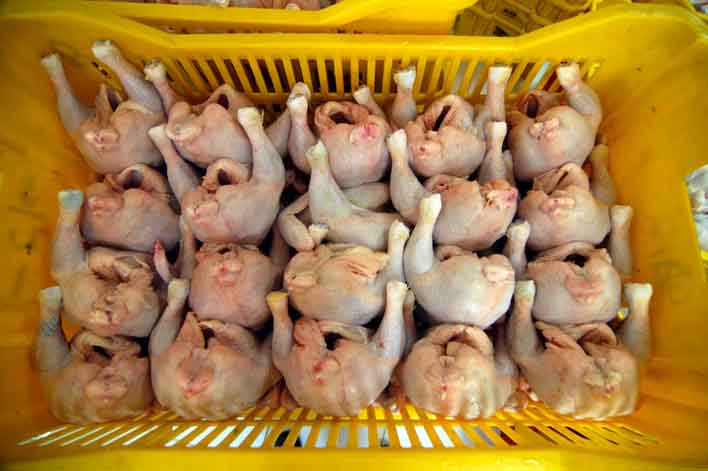 Rubber and metal are some of the recent surprise "ingredients" found in Tyson chicken. In January, 36,420 pounds of Tyson chicken nuggets were recalled due to rubber contamination. In March, a recall for possible metal contamination of ready-to-eat Tyson chicken strip products began which continues--now encompassing 12 million pounds. Tyson Foods is the world's second largest processor and marketer of chicken, beef, and pork, operating the Jimmy Dean, Hillshire Farm, Sara Lee, Ball Park and other well known brands.

Were the contaminations deliberate? Possibly speculates a high level USDA compliance operations official who says security at a meat processing plant is so loose "employees could deliberately introduce" harmful products into food.

As cheap labor and growth drugs make chicken a lucrative franchise, Tyson leads the way. Today a chicken is "grown" to a five-pound market weight in five weeks--twice as fast as 40 years ago. Despite "no antibiotics" claims, an investigation by Reuters found Tyson Foods and other major U.S. poultry firms are using antibiotics "more pervasively than regulators realize" after testing products coming out of feed mills.

In 2001, Tyson was served with a federal indictment charging that the company paid smugglers to transport illegal workers from Mexico across the Rio Grande, after which they were supplied with phony social security cards and brazenly paid with corporate checks. "This is a company with a bad history," Rev. Jim Lewis, an Episcopal minister in Arkansas, told the New York Times. "They cheat these workers out of pay and benefits, and then try to keep them quiet by threatening to send them back to Mexico."

In 2003, Tyson pleaded guilty to violating the Clean Water Act with effluvia from its Sedalia, Missouri, facility and agreed to pay $7.5 million. But before its probation ended, Tyson was charged by the state of Oklahoma with polluting the Illinois River watershed. Poultry polluters eject as much phosphorous into the watershed as a city of ten million people, said State Attorney General Drew Edmondson after bringing the changes. Phosphorus causes overgrowth of algae and other aquatic plants which chokes off oxygen vital to other marine life, especially animals. Want to find a chicken operation? Just follow the dead dish.

In 2004, an internal Tyson memo revealed that the wives of two veterinarians stationed at Tyson plants in Mexico had been receiving about $2,700 a month "for years," reported the New York Times. When Tyson executives discovered the bribes, the payments were simply switched to the veterinarians themselves. "Doctors will submit one invoice which will include the special payments formally [formerly?] being made to their spouses along with there [sic] normal consulting services fee," said a Tyson's audit department memo. (Apparently employees were absent the day both ethics and spelling were taught.) Tyson subsequently cooperated with the Justice Department and the Securities and Exchange Commission in an investigation of the apparent bribery, but no one was ever named or charged in the investigation. In fact, Greg Lee, Tyson's chief administrative officer who received the e-mail about the veterinarians, received $1 million and a $3.6 million consulting contract when he retired.

And, who can forget the charges that Tyson bribed former agriculture secretary in the Clinton administration Mike Espy with gifts to influence legislation in 1997 leading to his disgraced resignation? Tyson paid $6 million to settle the accusations but the two convicted Tyson executives facing prison time were pardoned by President Clinton.

And how about the animals on whose backs the Tyson's profits are balanced? Many people may remember the 2003 testimony of the late Virgil Butler, a whistle-blower at the Tyson's Grannis, Arkansas, chicken plant, who said that birds regularly miss the blade intended to kill them and are scalded alive in the defeathering tank.

"When this happens, the chickens flop, scream, kick, and their eyeballs pop out of their heads," wrote Butler in a sworn affidavit. "Then, they often come out the other end with broken bones and disfigured and missing body parts because they've struggled so much in the tank." A spokesperson for the National Chicken Council concedes these occurrences but says, "This process is over in a matter of minutes if not in seconds." Oh, in that case.....

Two percent of U.S. chickens meet such a death--180 million birds boiled alive a year. It is so common the victims are called "red birds" in the industry.

Butler also revealed that chickens' legs were broken at Tyson plants to make them fit kill line shackles, they were left to freeze to death and that employees, for amusement, injected them with dry ice so they would explode.

As people become aware of the humane, health and environmental consequences of factory farming, plant based meat alternatives are booming. This week, for example, Beyond Meat experienced the third biggest IPO debut on major American stock markets in the last decade. Are you listening, Tyson?

Related Topic(s): Chickens; Chickens; Employees; Farming; Farming; Food; Veterinarian; Workers, Add Tags
Add to My Group(s)
Go To Commenting
The views expressed herein are the sole responsibility of the author and do not necessarily reflect those of this website or its editors.