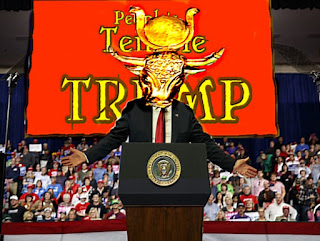 More education might do the trick, but Trump's cultists are difficult to teach.

And reaching sycophants like Stephen Miller is a lost cause.

This article was scheduled to be published over a month ago, but some health issues were compounded by the mass of almost daily salient points and thus kept interrupting its publication. The most unbelievable one - that his supporters might actually believe his repeated and ridiculous anti-abortion statement that Democrats approve of infanticide - almost laid me up for a week, so shocked was I at the lack of critical thinking on the part of over 1/3 of America.

As his raucous crowd booed and screamed, Trump described a hideous scenario that he insists Democrats approve of. "The baby is born," said Trump. "The mother meets with the doctor, they take care of the baby, they wrap the baby beautifully" at this, he seemed to mime rocking an infant "and then the doctor and the mother determine whether or not they will execute the baby." He made a chopping motion with his hand.


So Trump delivered his scariest lie yet to his scariest audience yet - a scary lie because it could cause incredible violence and a scary audience because many of them probably believe it just as Trump said.

Let's put aside the opinion that Trump's supporters are knuckle-dragging Neanderthals (I know, it's hard, but at least try*). To be sure, Trump's core is quite scary. Amidst the investigations, "Teflon Don" may be showing signs of wearing off to some, but still some 80% of Republicans support him and among them are the MAGA cap-wearing rally goers oblivious to the possibility that some among them in the crowd would take Trump's rhetoric to its obvious (to us) conclusion. At one rally, for instance, while he was saying that some of his off-the-cuff remarks were taken too seriously and comments about people like Hillary Clinton were akin to hate speech, as if it were a knee-jerk reaction, the crowd started shouting "lock her up" at the mention of Clinton's name. It was if he was talking to the wall - or himself. They logged on to a certain mindset, parroting his most dangerous memes and phrases looking like sociopolitical zombies or cult followers.

Meghan MCCain took a swipe at Trump suggesting "no one will ever love you like they loved my father" WRONG Meghan! Millions of Americans truly LOVE President Trump, not McCain. I'm one! We hated McCain for his ties to the Russian dossier & his vote against repealing Obamacare.

It's to bad that you type of people dont wake up and see what's he has done for the country. We didnt say anything when that lying lazy idiot before him was in office. But u cry babies will never get it

Rev. Dan Vojir is has been writing/blogging on religion and politics for the better part of ten years. A former radio talk show host (Strictly Books €" Talk America Radio Network) and book publisher, Dan has connected with some of the most (more...)
Related Topic(s): Donald Trump Supporters; Evangelical; Stephen Miller; Trump Apologists; Trump As The Messiah; Trump Cult; Trump Ego; Trump Idiot-in-chief; Trump Insults, Add Tags
Add to My Group(s)
Go To Commenting
The views expressed herein are the sole responsibility of the author and do not necessarily reflect those of this website or its editors.