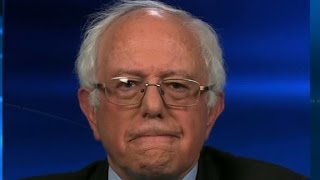 Sen. Bernie Sanders says the Republican health care bill is the .most harmful piece of legislation. he has seen in his life.
(Image by YouTube, Channel: CNN)   Details   DMCA

While the American people are rising up in large numbers against the hugely unpopular efforts by President Trump and Republican leaders to impose cruel policies on the American healthcare system, Senate Republicans retreated this week but are trying again to force-feed a horrendously bad bill through the Senate in the coming days.

When the Senate reconvenes after its July 4 recess, voters will witness a war of the worlds over the future of healthcare in America. The consequences of this epic political battle will affect every American, directly or indirectly, for generations to come.

The future of healthcare in America will ultimately be decided, and the well-being of hundreds of millions of Americans will be harmed or protected, by three GOP Senators. Sens. Lisa Murkowski (R-Alaska), Susan Collins (R-Maine) and Dean Heller (R-Nev.) will determine what plan offered by Senate GOP leaders, if any, will pass the Senate and go to conference with a House GOP bill that may be the most widely unpopular measure to pass either house of Congress in modern American history.

The plan offered by Senate Majority Leader Mitch McConnell (R-Ky.) was the illegitimate child of an abusive process that drafted the bill in secret meetings, during which special interest lobbyists were better informed than most Republican or Democratic senators. The process is led by GOP leaders who run the Senate as a one-party Republican state that treats liberals, moderates, centrists, political independents, Democrats and even some Republicans as non-citizens who should have no voice.

It is no surprise that this abusive process failed this week. Nor is it surprising that the defective product it produced, like the Republican House bill that was conceived through similarly abusive procedures that treat the House as a one-party GOP state, would have created so much misery for so many Americans that it could not even get a vote on the Senate floor.

While the epic battle over healthcare reform is a contest that will profoundly impact every American, it is also an epic battle for the soul and future of the GOP.

Will Senate and House Republicans continue to govern like a sectarian coalition of the conservative right, the far right and the alt-right without a place for authentic GOP moderates, centrists or bipartisan legislators? Are there three Senate moderate Republicans who would not be bullied to march in lockstep behind cruel and extreme policies that are rejected by most voters?

Countless polls prove that voters are rising up in large numbers against GOP healthcare plans that wage a war against the poor, impose cruel premium increases against seniors and force many grandmas and grandpas out of nursing homes through a savage attack against Medicaid that the president falsely promised to oppose.

Voters are rising up against GOP healthcare plans that attack the interests of mothers raising babies through maternal care coverage, that Republicans would cut and attack the health of mentally ill patients who did not have lobbyists in the secret meetings that devised these cruel and callous GOP plans that would cut coverage for them, too.

Voters are rising up against GOP healthcare plans that would reduce the number of insured by more then 20 million Americans, lead to dramatic increases in deductibles many pay for insurance coverage and impose punishing price increases for pharmaceuticals that make them well.

America has begun two great debates about the future of healthcare. The large debate that will be settled in the 2020 presidential campaign will pit progressive Democrats supporting Medicare for all against conservative Republicans supporting a purely market-based system.

Today, in real time, as Senate Republicans already plan to force-feed another healthcare nightmare through the Senate soon, there is a second great debate. Are there three Senate moderate Republicans left who will adamantly and courageously refuse to support healthcare policies that are grotesquely cruel, brutally unusual, and so widely reviled that large numbers of Americans are rising up against them?

Related Topic(s): Assault - Battery; Healthcare; Medicaid; Republican, Add Tags
Add to My Group(s)
Go To Commenting
The views expressed herein are the sole responsibility of the author and do not necessarily reflect those of this website or its editors.