The former ExxonMobil CEO is too conflicted, too ill-prepared, and too disengaged to be seriously considered for the position of secretary of state. 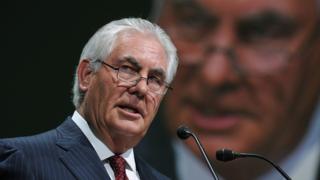 Rex Tillerson's witless, contradictory, and obfuscatory testimony before the Senate Foreign Relations Committee confirmed fears that the ExxonMobil CEO is too conflicted, too ill-prepared, and too disengaged from accepted understandings with regard to diplomacy, sustainable development, and human rights to be seriously considered for the position of secretary of state.

But the most unsettling exchange took place after an initial round of questioning by New Jersey Senator Robert Menendez. The veteran member of the Foreign Relations Committee asked what should have been a simple concluding question.

Senator Menendez: "For all of these answers you've given me, does the president-elect agree with you?"

Senator Menendez: "Well, in your statement on page three, you say, 'In his campaign, president-elect Trump proposed a bold new commitment to advancing American interests in our foreign policy. I hope to explain what this approach means and how I'd implement that policy if I am confirmed as Secretary of State.' I assumed to some degree you've had some discussion about what it is that that world view is going to be in order to understand whether you are willing to execute that on behalf of the person you're going to work for?"

Rex Tillerson: "In a broad construct and in terms of the principles that are going to guide that, yes, sir."

Senator Menendez: "I would have thought Russia would be at the very top of that, considering all that's taken place. Did that not happen?"

Rex Tillerson: "That has not occurred yet, Senator."

In an interview following the exchange on Wednesday, Senator Menendez said it was "beyond my imagination" that Tillerson had not engaged in serious discussions about major foreign-policy issues and concerns with President-elect Donald Trump.

Related Topic(s): Nomination; Rex Tillerson; Secretary Of State, Add Tags
Add to My Group(s)
Go To Commenting
The views expressed herein are the sole responsibility of the author and do not necessarily reflect those of this website or its editors.