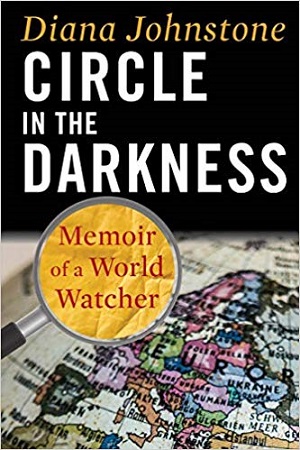 First, Diana Johnstone's memoir is a classic, and will be read and quoted as long as we keep struggling for peace and justice. It is one of the great personal accounts of the anguished decline of our un civilization, both a riveting eye-witness account of many of the horrors and perfidies, and a primer for students of history and all those struggling to not only dismantle the beast, but to prepare us for what follows it.

Read it and weep. And smile at the follies. And shout 'Yes!' as light bulbs flash in your mind.

Johnstone's concern in Circle in the Darkness Is not so much 'the lived experience of the transitory nature' of things but 'especially of the moral environment.' She was blessed to to begin at the beginning of the end. At the empire's undisputed zenith under FDR. And though not a card-carrying anything religious or left wing, she grabbed that blessing and stoked and nurtured it, creating her life, her jobs, a single mother raising a daughter in Minnesota and then France, seeing through the cant everywhere and using her only weapon, the pen, to expose it.

It is a frightening, unremittingly gruesome, Dantesque journey, but Johnstone's steady moral compass sees us through and is uplifting.

One of her first memories is seeing the Minerva of Peace mosaic by Elihu Vedder (1896) in the Library of Congress Thomas Jefferson Building, Washington, DC, with its very unpeaceful message: Minerva's peace and prosperity is attained only through warfare. Nike, a representation of Victory, similar to those erected by ancient Greeks to commemorate their success in battle, stands next to Minerva. I doubt that 3-yr-old Diana would have been able to articulate this message, but it hit me: this was a sign from beyond, be it from God or whatever. This little lady was fated to wrestle with the forces of war and peace till the day she dies.

So I thought: And what was happening in America in the 1890s to inspire Vedder (and Diana)?

1893: severe economic depression, as well as several strikes in the industrial workforce.

The decade saw much of the development of the automobile.This decade was also part of the Gilded Age, a phrase coined by Mark Twain, when the super rich were even more super, and the rest were super poor.

The Philippine Revolution began in 1896, ceded to US in 1898. The Provisional Government of Hawaii sent armed militia against the lepers in the Leprosy Colony of Kalawao. The template for Minerva's 'peace through war'.

Hey, isn't that today's empire? Just more of the same?

History comes to life in Johnstone's reflections, which cover almost a century, from the depths of the Depression and the rise of FDR to the sputtering loose canon of Trump, with America looking in many ways like the mess it was when Johnstone was born.

But it is not mass unemployment that is the chief cause of the malaise today. Keynes and a massive state sector combine with Eisenhower's 'military industrial complex' more or less 'solved' that. The problem is deeper. It is the same uneducated nation, steeped in 'enemies', for the past century, anti-communism, writ large despite the demise of communism. The fear of yet another world war, environmental armaggedon, capitalism blind to its fatal flaws. And Americans too, blind and ignorant of foreign affairs, always fearful of the 'other', willing to leave world affairs in the hands of officials, who presumably know better.

Johnstone has spent most of her life abroad, in France, the rare foreign correspondent (she created a job as foreign correspondent for In These Times ) who has free rein to explore a story, and a mission from the left wing ITT , to cover socialist/ communist politics in Europe, bringing her to meet with and cover the careers of remarkable people such as Olaf Palme and Willy Brandt, and to reflect on the demise of the old guard communists such as Marchais and Berlinguer and the embrace of social democracy by the heirs of Lenin and Stalin, so-called Eurocommunism, which abandons any thought of revolution, relegating it to oblivion.

Circle in the Darkness is almost an encyclopedia of the landmark events, which Johnstone covered as both journalist, participant, friend and enemy. Her calm passion for justice motivates her throughout her very 'lived life', someone for Socrates to admire, like Johnstone, crucified for his unflinching honesty. Though she may not have stopped the Vietnam war ('the Viet Cong did that'), she created ways to help, inventing first a Community Contact outreach program to knock on doors to talk about Vietnam with the Minnesotan public.

Related Topic(s): Assassination; Civilization; History; Memoir; Nazism; World Issues, Add Tags
Add to My Group(s)
Go To Commenting
The views expressed herein are the sole responsibility of the author and do not necessarily reflect those of this website or its editors.