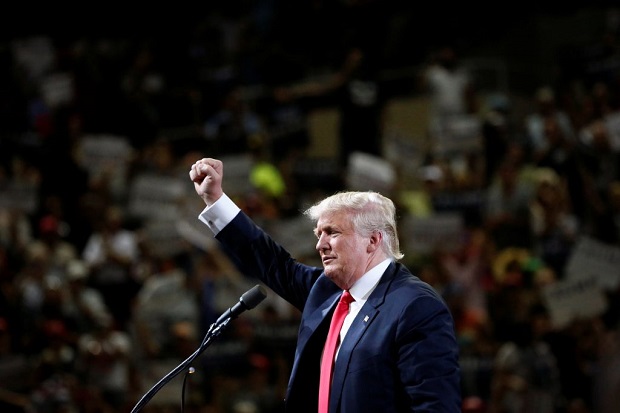 There is no reason why any journalist worth his or her salt should be treating Donald Trump and his dysfunctional administration as anything other than an aberration. To normalize Trump is to act as an instrument of his propaganda machinery, which has borrowed heavily from Nazi Propaganda Minister Joseph Goebbels, as well as apparatchiks' playbooks found in information ministries in countless tinpot dictatorships that have existed throughout recent history.

Trump has totally eliminated the White House daily press briefing, a veritable institution in Washington. Trump also regularly rants against America's free press as the "enemy of the people." He means to say, "his people," a dangerous collection of neo-Nazis, white supremacists, and low-intellect rubes who feast daily on the bait tossed out by Fox News and another cable television operation linked to the "Moonie" cult, One America News Network. Trump recently hosted a social media "summit" at the White House for 200 conspiracy progenitors, including those who believe in the codswallop from the so-called "QAnon," a subterranean cadre of lunatics and mental patients.

After the "summit," the 200 crazies were invited to take the seats in the Rose Garden normally reserved for the White House Press Corps. Trump held a press conference on the census, flanked by Commerce Secretary Wilbur Ross and Attorney General William Barr. The officially credentialed press members were forced to stand in the back, something clearly arranged by Trump as a form of collective punishment. After the press conference, at which no questions from the media were fielded, the Rose Garden, the scene of several historically significant events, was turned into a neo-Nazi/KKK screaming rally for such nut cases as "Dr." Sebastian Gorka, a proud member of a Hungarian Nazi order; James O'Keefe, the video "documentary" fabulist; QAnon promoter and practicing Scientologist Joy Villa; and Mark Dice, a YouTube-based conspiracy rabble rouser. Legitimate White House reporters Jim Acosta and Brian Karem were verbally abused by those in the collection of neo-Nazi and conspiracy kooks. Neither White House aides nor the Secret Service stepped in to prevent the harassment of the White House Press Corps.

The press is routinely subjected to physical and psychological harassment by Trump. So why does the press continue to use the honorific title of "President Trump" or "the President" when referring to such an illegitimate guttersnipe? WMR will only refer to Trump by his name. He deserves no other respectful appellations, particularly "Mr. President."

Donald Trump and his administration are illegitimate usurpers of political power. They have practiced the same type of voter disenfranchisement that kept white minority governments in power in South Africa and the former Rhodesia. The de facto return to Jim Crow voting laws in the South have seen voter rolls purged of legitimate voters, mostly African American and Hispanic. In the Midwest and West, these same tactics have been employed against Native Americans.

Those opposed to the white minority government of South Africa, including journalists, referred to that government as the "apartheid regime." It was certainly not a government that represented the 23 million black population. The apartheid regime even fenced off reservations for blackshilariously referring to them as "independent homelands." The international press, however, did not take the bait and referred to the reservations as "Bantustans."

Apartheid South African President P. W. Botha may have believed in the notion of "grand apartheid," but journalists correctly referred to him as the leader of the apartheid regime, which was a pariah among the world's nations.

Similarly, the self-declared independence of white minority Rhodesia in 1965 resulted in non-recognition from the rest of the world. Journalists referred to Rhodesia's illegally declared government as the "Smith regime," a reference to its Prime Minister, Ian D. Smith. As with the apartheid regime in South Africa, the Smith regime was treated as an aberration. Regimes, by nature, are illegitimate governments. It would not be extreme to refer to the current American administration as the "Trump regime," a nod to its illegitimacy, unconstitutionality, and racist and xenophobic policies. The dictionary defines a regime as an "authoritarian government." That fairly sums up the Trump administration and its self-declared "unitary executive."

Another racist entity, the State of Israel, refers to the illegally occupied West Bank as "Judea and Samaria." Most of the international press continues to call the territory the "occupied West Bank," part of the "State of Palestine." Regardless of Trump's actions in recognizing Jerusalem, not Tel Aviv, as Israel's capital and the illegally occupied Golan Heights of Syria as being under Israeli sovereignty, the rest of the world rejects these unilateral decisions devoid of legitimacy under international law. Iran continues to call the Jewish supremacist government of Israel the "Zionist entity." Today, that seems to be a fair description of the Israeli government of Binyamin Netanyahu and his far-right ministers.

Various Latin American dictatorships were called "military juntas" by the U.S. media. And during the 1970s, when President Jimmy Carter was emphasizing America's commitment to human rights, the press did not hesitate to refer to the "Somoza regime," the "Stroessner regime," and the Chilean and Uruguayan "military juntas."

The press in countries at war with Nazi Germany, Italy, and Imperial Japan did not shrink from calling the governments of the Axis enemy nations the "Hitler regime," "the fascist regime," and the "jingo warlord regime," respectively. Jingo is defined as a "vociferous supporter of policy favoring war, especially in the name of patriotism." That pretty much describes the saber-rattling Trump, who has militarily threatened Iran, North Korea, Venezuela, and Syria. The wartime Allied press also correctly referred to the Japanese-imposed governments of Manchukuo (Manchuria) and the rump China as puppet regimes. The United States has suffered the imposition of a puppet regime installed by a cabal of foreign state and non-state entities. Therefore, the use of the phrase "Trump regime" is highly appropriate.

One would have to go back several presidential administrations to find the description of regime applied to a U.S. presidency. Woodrow Wilson, a segregationist and racist, saw the press routinely refer to his administration as the "Wilson regime." That was until he ordered his attorney general, Thomas Watt Gregory, to use the wartime powers of the Espionage and Sedition Acts to harass journalists and other Americans for failure to support Wilson and the war effort. The acts and their amendments criminalized anti-Wilson speech in the United States, singling out for criminal prosecution "any disloyal, profane, scurrilous, or abusive language about the form of government of the United States . . . or the flag of the United States." The acts were used by Wilson to imprison Socialist presidential candidate Eugene V. Debs and threaten with imprisonment former President Theodore Roosevelt. It all sounds very familiar.

After Trump tweeted that four Democratic congresswomen should go back where they came from, Trump followed that racist comment with: "When will the Radical Left Congresswomen apologize to our Country, the people of Israel and even to the Office of the President, for the foul language they have used, and the terrible things they have said. So many people are angry at them & their horrible & disgusting actions!"

Autocrats like Trump are reviled during their lives and long after their deaths. The traitorous wartime puppet leaders of Norway and France stand out among such pariahs.

The government of Norway's Nazi puppet ruler, Vidkun Quisling, was correctly called the "Quisling regime." It lacked legitimacy abroad and within Norway. Some newspapers, including the press in neighboring Sweden, called it the "Quisling Fifth Columnist" regime. Today, the word "quisling" is synonymous with traitor. Will the word "trump" also one day find itself used as a noun meaning "traitor" and political scoundrel of the worst sort?