Huston Smith, perhaps the world's leading expert on religions, passed away at the age of 97 on December 30th, 2016.

I interviewed him in early summer 2004. Here's a reprint of the interview 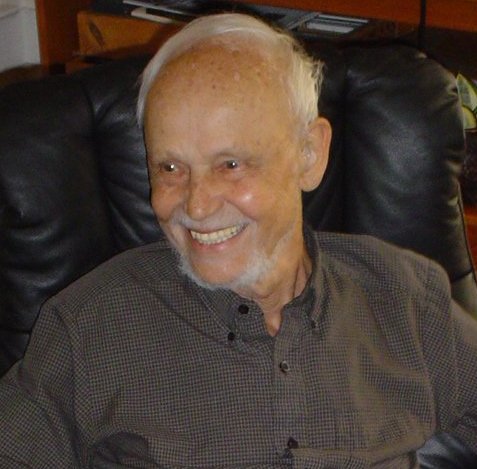 Politics and Religion; An Interview With Huston Smith an interview with the world's leading author on world religions discussing Jihad, the rapture, the Left Behind Series, and the use of religion to influence politics

It's difficult to miss encountering Huston Smith if you do a search on world religions, if you go to college and get textbooks.... he's the one who wrote the books. So it was a great honor and pleasure to meet him and interview him at the first mythic journeys conference. Here's a more complete bio from his website hustonsmith.net

Holder of twelve honorary degrees, Smith 's fourteen books include The World 's Religions which has sold over 2 million copies, and Why Religion Matter which won the Wilbur Award for the best book on religion published in 2001. In 1996 Bill Moyers devoted a 5-part PBS Special, The Wisdom of Faith with Huston Smith, to his life and work. His film documentaries on Hinduism, Tibetan Buddhism, and Sufism have all won International. awards, and The Journal of Ethnomusicology lauded his discovery of Tibetan multiphonic chanting as "an important landmark in the study of music."

Rob: I publish a news and opinion website. What I wanted to talk to you about is the connection between religion and politics that 's happening now. Before I ask you any specific questions have you had any thoughts or observations on what 's going on with this.

Huston Smith: I get asked that all the time since 9-11, so it 's uppermost in my mind. Let me lead into it with a true anecdote.

One of my friends-- I 've been very blessed with the friends I 've had, is Saul Bellow, and I brought him to Syracuse University, where I was teaching, in the seventies and Saul Bellow is a big fish and Syracuse University is a kind of small puddle, so the press corps in Syracuse mounted a press conference with him. And since I was his host for his visit, I was there.

The spokesperson for the press corps said, "Mr. Bellow, we 're all writers here. You 're a writer. What 's the difference between us?"

Now that gives me a lead in for this, because when we 're talking about religion and politics we have to make a slight between between the news of eternity religion and the news of the day. By the news of eternity, that 's my short phrase for what the great founders of the religions taught and lived. Now let 's just take CHristianity. Jesus, the "price of peace" as he 's often referred to, taught that we should love even our enemies. And you can go just right down the line. I could put on my historian of religions cap and go through all the major religions and the founders all teach that in their own idiom.

I 'll give one more example-- Islam-- because jihad is used so much to denigrate Muhammed and Muslims. But it 's not true that Muhammed himself or the Koran-- the Jihad-- this word which those who want to downplay and scurrilize the Muslim, used so often, literally, it means holy war. They pick up the war part. But they take it out of context because in the ten year skirmishes that Muhammed in Medina fled and escaped from Mecca because they wanted to do him in because of his message of justice, and so they were fighting for a toehold in history and they came back from one of these skirmishes and Muhammed said that "we have returned fromt he lesser holy war to face the greater holy war-- the battle that is the evil that is in the heart of every one of us.

You wouldn't know that from reading the newspapers and so-on. So I 'll rest my case for this round by saying that in their founding revelation they all preach peace.

Related Topic(s): History and Religion; Religion; Religion-Politics, Add Tags
Add to My Group(s)
Go To Commenting
The views expressed herein are the sole responsibility of the author and do not necessarily reflect those of this website or its editors.