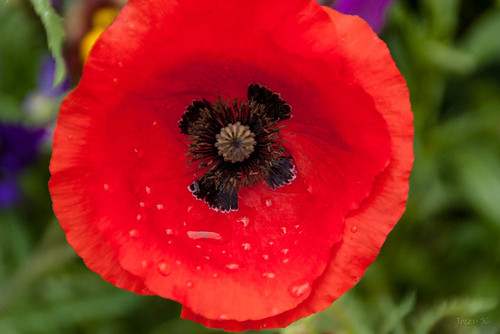 As we approach the 11th hour of the 11th day of the 11th month our political, media and military elites are once again blanketing the public sphere with martial patriotism.

NDP MP Don Davies got the ball rolling with some Yankee capitalist bashing that cheaply covered for his jingoism. After Whole Foods blocked its employees from wearing anything on their uniform - implemented in response to workers expressing solidarity with Black Lives Matter - he put forward a motion in the House of Commons critical of Whole Foods for not allowing employees to wear red poppies. He subsequently published a statement noting:

"American billionaire Jeff Bezos' company Whole Foods tried to ban their employees from displaying the poppy while at work. Thankfully, due to massive public pressure and a condemnation by Parliament, the company has quickly reversed their decision. But no Canadian should ever be told they can't wear the poppy to remember our veterans and the sacrifices they made to preserve our free society from the horrors of fascism. Our veterans sacrificed too much. It's time to enshrine in law the right for every Canadian to wear a poppy in the workplace so this situation never arises again."

Global News' Ontario news director, Mackay Taggart, sent an email to staff stating, "Poppies should be worn by all Global News anchors, reporters and radio hosts appearing on television and in online videos from Sunday November 1st to Wednesday November 11th." The email also counselled Global staff to wear a poppy while off work. "In today's era of social media, it would also be good practice for all our personalities to be diligent and mindful of wearing a poppy when out in public", added Taggart.

As I detail in this story, a militaristic, imperialistic, Royal Canadian Legion owns the copyright to the red poppy. To help the historically racist and homophobic organization fundraise, the federal government granted it a monopoly over poppy distribution more than a decade before Canada got involved in the fight against "fascism", which Davies wants us to believe the poppy represents.

Red poppies were inspired by the 1915 poem "In Flanders Fields" by Canadian army officer John McCrae. The pro-war poem calls on Canadians to "take up our quarrel with the foe" and was used to promote war bonds and recruit soldiers during World War I.

As Davies must know Remembrance Day marks the end of WWI, which was a capitalist, colonialist, horror show. The ruling elites of France, Germany, England and Russia saw war as a way to weaken working class challenges in their countries. The other major force that spurred WWI was inter-imperial rivalry in Europe. It was a struggle for global supremacy between up-and-coming Germany and the imperial powers of the day, Britain and France. In fact, support for the British Empire was Ottawa's primary motive in joining the war. As Canada's Prime Minister Robert Borden saw it, the fight was "to put forth every effort and to make every sacrifice necessary to ensure the integrity and maintain the honour of our empire."

During WWI Canadian troops supported the colonial system in the Caribbean. Canadians also fought to conquer German West and East Africa, as well as Iraq and Palestine. In East Africa alone about one million died as a direct result of the war.

The horror of the war in Europe is hard to wrap one's head around. Over four days nearly 16,000 Canadian were killed or gravely wounded fighting for a few yards of terrain at Passchendaele. During the battle for Hill 70 9,000 Canadian suffered casualties while militarists boast that Canadians "killed or wounded an estimated 25,000 Germans" fighting for the largely inconsequential hill.

The total number of Germans and others killed by Canadians during the war is unknown. Canadians killed many Germans who surrendered though. In a 1929 book English poet Robert Graves wrote, "the troops that had the worst reputation for acts of violence against prisoners were the Canadians." One Canadian soldier wrote his parents, "after losing half of my company there [Neuville-Vitasse], we rushed them and they had the nerve to throw up their hands and cry, 'Kamerad.' All the 'Kamerad' they got was a foot of cold steel thro' them from my remaining men while I blew their brains out with my revolver without any hesitation." Some Canadian commanders even ordered their soldiers not to take prisoners. In "The Politics of Surrender: Canadian Soldiers and the Killing of Prisoners in the Great War" official military historian Tim Cook points out that the evidence of these killings came from interviews the CBC conducted with aging veterans for a 1960s radio series. "Dozens of Canadians testified to the execution of German prisoners," Cook said of the 600 WWI interviews. But "none of these grim accounts found their way into the final 17-hour script."

No one in their right mind should celebrate WWI. But what about Canada's other military deployments?

The 385 Canadians sent to Sudan in 1884 to defend Britain's position on the upper Nile should not be celebrated. Nor should the 7,000 Canadians dispatched to strengthen Britain's position in southern Africa during the 1899-1902 Boer War. The 26,000 Canadian sent to Korea in the early 1950s helped turn a civil war into a multi country conflict that left as many as four million dead. In the 1990s Canada contributed significantly to the first Iraq war and participated in NATO's 78-day bombing of Serbia. Both of these conflicts were bad for humanity. So was the war in Afghanistan, which saw 40,000 Canadian sent there between 2001 and 2014, and the bombing of Libya in 2011.

Canadian soldiers have only fought in one morally justifiable war: World War II. And even in that case, it was Nazi expansionism's threat to British interests, not opposition to fascism or anti-Semitism, that led Ottawa to battle. Additionally, Ottawa's position on the 1936-1939 Spanish Civil War enabled the rise of fascism in Europe and Canadian forces were responsible for numerous atrocities during WWII. Nonetheless, WWII was ultimately justifiable.

Related Topic(s): Remembered Image, Add Tags
Add to My Group(s)
Go To Commenting
The views expressed herein are the sole responsibility of the author and do not necessarily reflect those of this website or its editors.