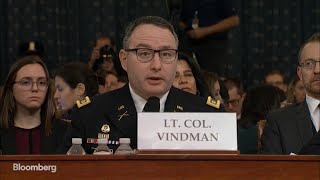 The battle to turn back Donald Trump's assault on the United States Constitution and the republic it empowers is a battle that must be fought and must be won. Now.

If the measure of the struggle is the television rating it generates, the path to success becomes quite narrow. In fact, it is quite likely the American people will respect the efforts of Congressional Democrats even more if the Democrats stand on principle rather than allowing polling numbers to dictate their strategy. The polling numbers follow the principle, not the other way around.

The impeachment witness testimonies thus far have been historic and riveting. While not many Trump supporters are saying right now that they are abandoning him, they all say they are watching. It's a small but crucial victory.

Trump supporters, while not particularly well-educated typically, are undoubtedly of sufficient intelligence and social awareness to comprehend the enormity of what they watched the witnesses say, even if they won't yet admit it. It was stark, unequivocal, and unanimous. Every witness said: Trump used his power as president to "pressure" Ukrainian president Volodymyr Zelensky to announce an investigation into American presidential candidate Joe Biden and his son Hunter Biden, and withheld vitally-needed military aid to do it. Every witness, Republican and Democrat alike, knew it and said it directly under oath, on national television. From that Trump's base can run, but they cannot hide.

Up until now, Trump's supporters have chosen to stick with him because, although they are well aware of his lawlessness, it was more politically convenient to do so than to abandon him. But everything has its limitations. The Democrats must have sufficient confidence in themselves and in what they heard the witnesses say to press the case. This is a big moment.

The dam of public support has not yet broken, but it can. It depends on the strength, the vision, and the determination the Democrats and independent-minded Americans who understand the gravity of the situation are able to muster at this moment in history. There are still big shoes that can and likely will drop.

Rudy Giuliani is under close examination, and two of his Russian associates are already under indictment for campaign finance violations in connection with Trump and his never-ending reelection campaign. That situation could easily boil over. John Bolton is, for the moment, choosing not to speak for reasons best defined by him. But he too can change at a moment's notice.

There is no time for slipping into disappointment. The Democrats and their independent supporters need to get ready for the next rounds with urgency. Either you defeat Trump or he defeats you. It's a zero-sum game. There is no middle ground. This time the war is over here. It must be fought and won now.

Related Topic(s): Democrats; Impeachment; Investigation; Polling; Supporters; Trump, Add Tags
Add to My Group(s)
Go To Commenting
The views expressed herein are the sole responsibility of the author and do not necessarily reflect those of this website or its editors.