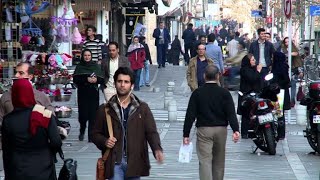 Tehranis share economic grievances as protests rage across Iran The streets of Iran's capital have been relatively quiet as protests hit much of the country, but Tehranis still have plenty to complain about and demand action from the government.
(Image by YouTube, Channel: AFP news agency)   Details   DMCA

People in Tehran during recent protests

What's really going on with the recent protests in Iran? It's not exactly clear and straight forward.

Apparently the Iranian people do have legitimate grievances. Unconfirmed reports have inflation at some 40% with youth unemployment hovering above 30%.

The protests have been widespread in a number of Iranian cities not just Tehran.

There's been a crackdown by the regime of some social media-the biggest criticism coming from the US corporate MSM-banning a site that was inciting readers to commit acts of violence urging people to throw Molotov cocktails and smash windows, which significantly has been left out of those MSM reports.

There's been suspicion of agent-provocateurs stirring up crowds to commit violence and condemning the regime-which is of course a CIA specialty along with the Israeli Mossad-but there has been no real confirmation as yet.

The best assessments this writer has read and heard was an article, "Iran's Protests & Why They Failed," [1] by Sayed Mostafa Mousavi, a Human rights and political activist based in Tehran and a podcast interview [2] conducted by Margaret Flowers and Kevin Zeese with Mostafa Afzalzadeh, an independent journalist and documentary filmmaker based in Tehran.

Mousavi sees the protests numbering in the hundreds, nowhere near the hundreds of thousands in 2009 protesting the legitimacy of the re-election of President Mahmoud Ahmadinejad.

He sees the protests as not focused combining legitimate grievances of high inflation and youth unemployment mixed in with condemnation of the regime and sporadic cases of violence. He also sees the protests winding down from a week ago.

The podcast interview with Afzalzadeh gives a first-hand look of the protests confirming much of what Mousavi writes in his piece.

Juxtapose these reflections on the ground in Iran with what we get from the US corporate MSM i.e. the regime is cracking down on social media and over-reacting to violence causing some deaths to protesters; without revealing any direct knowledge from their investigative reporters on the ground-there aren't any-just accusations and insinuations that substitute for any factual reporting.

The "Donald" supports the protests but this buffoon spouts and tweets anything that comes into his head as there is no evidence he has any historical knowledge of Iran other than being against the 2015 nuclear deal with Iran which he wants reversed. That the deal was a UN Security Council international agreement with the US a signatory and can't unilaterally break without going against the UN Charter and in direct opposition to the other signatories Britain, France, Russia, China and Germany which sees Iran in basic compliance and want the deal to continue seems to elude the self important narcissist in the White House.

Include Israeli Prime Minister Benjamin Netanyahu and Saudi Arabian Crown Prince Mohammad bin Salman as the only other opponents against the 2015 nuclear deal with Iran and we see a pattern of the world's greatest aggressors in league with each other against Iran which the rest of the world can't fail to see.

Getting back to the protests, for what it's worth here's my assessment on them and the potential for conflict:

There seems to be legitimate grievances by the Iranian people over high inflation and youth unemployment.

Retired. The author of "DECEIT AND EXCESS IN AMERICA, HOW THE MONEYED INTERESTS HAVE STOLEN AMERICA AND HOW WE CAN GET IT BACK", Authorhouse, 2009
Related Topic(s): Crowds; Inflation; Iran; Issues; Sanctions; Unemployment, Add Tags
Add to My Group(s)
Go To Commenting
The views expressed herein are the sole responsibility of the author and do not necessarily reflect those of this website or its editors.