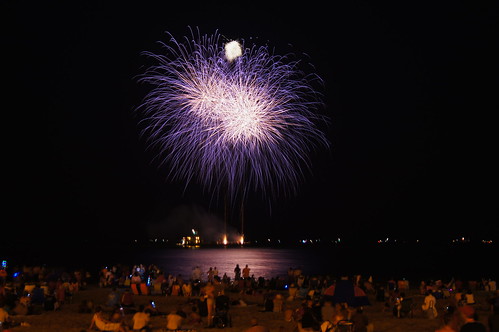 This season of extreme political discontent in the U.S. A. has thrown a harsh new light on what I used to call "the ideal American identity story." That story goes like this: we're the country whose people share ideals like freedom, equality, justice, and rule of law for all. I believe it is still true that almost everyone in our country shares those ideals. But it has become very obvious this year that there are still a significant number of folks among us, including the presumptive GOP candidate for president, who don't. Those folks are up front and vocal about not wanting to see our American ideals extended to everyone in our nation, especially if they are people of color, immigrants, Muslims, or LGBT. I also used to say that even if all those ideals are not being fully realized right now, they are still precious as lodestones for us all. I used to point to improvements in our laws, institutions, and public behavior that have always come from progressive leaders who raise up those ideals and push to get them shared more widely. But the level of crisis we have today around truly un-American violations of our national ideals requires much more than that. I believe there are many in our country who are ready to actively fight back against this rising tide of hate. A wonderful example of this is a story that recently went viral on the web. It's about a whole New York City subway car that spontaneously erupted in support of two scarved Muslim women who were verbally attacked by a man who had just boarded the train. At the next stop, the man got off, to a round of cheering to see him gone. (1) But real, long term success in resisting this new level of hate will require skillful messaging as well as spontaneous defense of the abused.

Because of all this, for the last year, we at the Metaphor Project have been working intensively behind the scenes on getting up to speed about what needs to be said and pushed into public dialogue about this brutal new challenge to our American ideals. In addition to research, outreach, blogging and tweeting, we've been reviewing and redesigning our booth 414 at Netroots '16, being held in St. Louis, MO, just 30 miles away from Ferguson. And we've learned that there is more to do than just resisting the new wave of Trump-led racism, sexism, anti-immigrant hostility, and general intolerance. We've been getting some deep background on the way this kind of bigotry has done some of its worst damage in a quiet, behind the scenes campaign throughout American history. That happens via deceptive legislative and regulatory finagling, misleading language, gerrymandering, outright lies, and the power of elite sub- cultures where overt abuse is increasingly tolerated. You could even call it a secret, de facto conspiracy, one that passes for "business as usual" while it destroys our country's honor at home and abroad in the name of American "exceptionalism." At best it's based on faulty stereotypes and miles- deep cultural ignorance. At its worst, it has deep roots in intentionally vicious, behind the scenes exploitation of fear and hatred, for financial and political gain. (Don't know what I mean? See Note 2.)

What are some of the sources we've used for studying these issues? First, let me cite a few outstanding books : Waking Up White, by Debby Irving and Uprooting Racism, by Paul Kivel. The first is the story of a white woman raised to believe in the normalcy of white privilege, finding out how she was shaped by that "de facto conspiracy," without even knowing it, until she woke up. The second is a comprehensive approach to what to do about racism and other kinds of intolerance, written by the founder of SURJ (Showing Up for Racial Justice), an organization we also recommend. We found out about SURJ via an event put on by the Catalyst Project in nearby Oakland entitled The Future of Solidarity Then there are the many-faceted programs of AFSC(the American Friends Service Committee) on ending racism, inclusion and equality, and the "39 Questions for White People" project. And if you have noticed that many of these authors and organizations are also "white," you have noticed the most important thing we've learned this year: it's the job of "white people" to work with other "white people" to uproot racism and intolerance. We do need to listen to the people who've been attacked and marginalized about their experience, about what they want, and to follow their leadership to solutions. But we "white people" are the ones who must lead America's white minority in dismantling the ""de facto conspiracy," that destroys our nation's honor. Of course, The Metaphor Project works with words; but words really do matter in this fight.

First of all, we suggest putting positive words and visions first, because that always works best. So we would say that every U.S. citizen or new immigrant, no matter what their color, creed or gender, deserves respect and equity. Try these: "Respect is a human right," "Respect is an American right," ""Respect, not bullying." Of course, for us to hold our heads up as proud citizens of our constitutional democracy means that redress of these abuses must be a priority now. Deciding exactly what form that redress will take is up to those who have been hurt by American exploitation and discrimination. But to get there, we need to encourage everyone to "claim their right to our best national ideals." It's also a time to remind folks to use familiar political words, phrases, metaphors, catch phrases, what we at the MP call "truth bites," to tell what we think are the two most important stories right now.

The first story is a "future-casting" (or backcasting from the future") story about how our best national ideals actually got extended to everyone in our nation. This kind of imaginative work is a very important tool in all social change work; it involves visualizing positive changes, and exactly how they might come about in reality. Once a vision is clear, and the paths to its becoming real are imagined, the practical steps of organizing goals, strategies, tactics and communications become much easier. In the case of the ideal future story, folks might want to try out the exercise in areas that are dear to them, such as jobs, education, health care, environmental justice, and so on.

The second story, of course, is about how our shared national ideals have been dishonored in the past and are being so now by abuse of so many people in our country. These stories need to be specific and detailed (no vague multisyllabic stuff here about "institutional racism," "discrimination," or "intolerance"). These are the facts we need to change in order to arrive in the ideal future we want. Together, these two stories, future and present, make up the "positive x, not negative y" framing pattern I always recommend. You can learn more about how to get your stories boiled down to short punchy phrases, metaphors, and sound (truth) bites that will stick and go viral by looking at our American Political Framing Tools at www.metaphorproject.org. Telling a "new story" also works best if you combine two familiar frames (ideas) to create a brand new idea: "marriage equality," or "community rights."

To help you a bit more with this story-telling project, we've also made a few simple changes on the Metaphor Project website in our standard framing tools, especially in the American Story Elements section. For example, we've added "equity" and "inclusion" to the "American Nation" piece, and a number of new items to the American Nightmare section. (If you think of more things to add to or subtract from our American Framing Tools, let us know. We also invite you, your friends, colleagues, and family members to join in this dialogue about what stories, words, phrases, and metaphors will work best to redeem our national honor. Send your suggestions to me at metaphorproject|AT|earthlink.netEmail address )

Always remember, even if controversy is stimulated by a word, phrase, or metaphor, it wins if it calls attention to the issue. As the saying goes, there is no truly bad PR; a famous old saw goes something like this: "First they ignored us, then they fought us, then they called our ideas the new normal." This is what we can all hope for as the best outcome of our current national crisis of growing disrespect and national dishonor. The right words can help make a big difference, as we work together to redeem our nation's honor. That would benefit us all!
---------------------------------
Susan C. Strong, Ph.D., is the Founder and Executive Director of The Metaphor Project, http://www.metaphorproject.org, and author of our book, Move Our Message: How to Get America's Ear. The Metaphor Project has been helping progressives mainstream their messages since 1997. Follow Susan on Twitter @SusanCStrong.
---------------------------------

"Just now, on my way to work, a man got on my train yelling as he came onto an incredibly packed train for the "two terrorist foreigners to go back to where theycame from." These two "terrorist foreigners" were two (understandably terrified) hijabi Muslim women. Before I could say anything, the entire train erupted in anger. A black man, a Romanian, a gay man, a bunch of Asians, and a score of others came to their defense demanding that this man leave these women alone and get off this train. The man insisted that the two women go back home and take their bombs with them.

After some back and forth, one man said, "This is New York City. The most diverse place in the world. And in New York, we protect our own and we don't give a f*ck what anyone looks like or who they love, or any of those things. It's time for you to leave these women alone, Sir."

I couldn't have said it better. Sure enough, our train was stopped. This royal douche got off the train to the sound of cheering."

2. The Klan may be out in the open today, but most of the bigoted activity I'm referencing is set in motion behind closed doors. Think back to 2008, when it came out that people of color had been deliberately targeted for the dangerous loans that brought the U.S. economy down in the end. Or see my last blog post, U.S.A. 2016, for an account of the way the drug war was explicitly started by Nixon in order to steal the vote from Blacks. Or the way that some police all over our country still shoot or strangle certain people first and maybe ask questions later. Then there's the new Trans bathroom panic that is a classic case of whipping up a ridiculous hysteria that has absolutely no basis in fact. Or the new attacks on all Muslims we're seeing now. And so on. Who gains from this stuff? How? Think about it. Some people actually do.