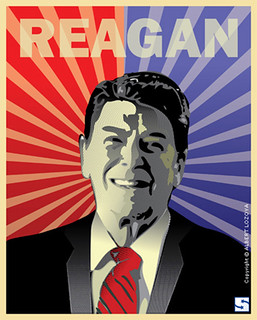 With the first Republican debate set for Aug. 6 in Cleveland, one has to wonder how often Ronald Reagan's name will be invoked. One sure bet: Not one debater at the Q will mention the Springfield-Mazzoli Act which Reagan signed in 1986, granting legal status to undocumented residents.

Cleveland had another major debate back on Oct. 28, 1980. At Music Hall, Reagan hammered President Jimmy Carter on his mishandling of government, pointing to "the General Accounting Office estimate that there is probably tens of billions of dollars that is lost in fraud alone ... waste adds even more." The debate helped seal Reagan's victory.

The coming Aug. 6 debate could frame the current election and have as much impact.

The recall election that Wisconsin Gov. Scott Walker, now a GOP Republican presidential candidate, won in 2012 was on the date of Reagan's death, and he said the coincidence "sent a shiver down my spine." Walker said in his July 13 presidential announcement, "Reagan was the best president."

Tax crusader Grover Norquist, who often gets the legislation he advocates, wants a "Ronald Reagan Legacy Project" to name at least one public landmark in every state after him. Ohio is covered -- Cincinnati has the Ronald Reagan Cross County Highway.

Reagan was the Great Communicator. His rhetorical inspiration, beginning with his campaign ad theme, "It's Morning in America," deserves its status.

He is perceived as the patron saint of lower taxes and limited government -- an image he helped create during the Cleveland debate. Reaganomics is hailed as proof that shrinking government and taxes can create a booming economy in which wealth trickles down.

However, under Reagan, the federal government did not shrink. The federal workforce increased by 324,000 to 5.3 million, federal spending rose from $517 billion to $991 billion and the national debt tripled, from $907 billion in 1980 to $2.6 trillion in 1988, the largest percentage growth of debt under any president.

Ohio Gov. John Kasich believes he has strong Reagan-like credentials, including his stint as House Budget Committee chairman from 1995 to 2001, when he led the way in Republican domestic budget cuts and program freezes.

A Washington Times headline on May 10 asked, "Is John Kasich the next Reagan?" The accompanying story points out that Kasich helped President Bill Clinton balance the federal budget. The problem with their analysis is that, unlike Clinton, who balanced the federal budget three times, Reagan never balanced the budget.

During the Great Depression, the New Deal provided families a way out through jobs and government-funded programs -- programs Reagan intentionally gutted.

While scratching the backs of big business with large tax cuts, in 1983, Reagan saw the poverty level jump from 13 percent to 15.2 percent. There was a 3.4 percent decrease in poverty under Clinton.

The Reagan myth credits him with engineering the collapse of the Soviet Union -- "Mr. Gorbachev, tear down this wall!" -- and increasing U.S. military funding to levels 43 percent higher than it was during the Vietnam War. However, the Russian economy imploded of its own accord.

Related Topic(s): Bill Clinton; Cleveland; Cleveland Plain Dealer; Debate; Elections And Campaigns; Jimmy Carter; Osama Bin Laden; People Osama Bin Laden; Republicans-GOP; Ronald Reagan, Add Tags
Add to My Group(s)
Go To Commenting
The views expressed herein are the sole responsibility of the author and do not necessarily reflect those of this website or its editors.