Heroic Jewish protester's outrageous disruption of devotional worship should be an inspiration for freedom seekers all over the world. 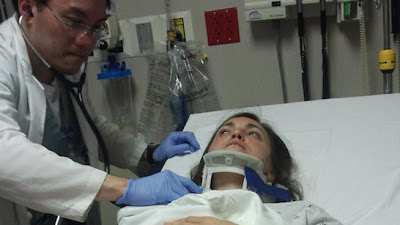 
On May 24 a brave young woman, Rae Abileah, working with Codepink, protested out loud against Israel's war crimes and offered a "ray" of hope to a tortured world. The congregation (US Congress) she rudely disrupted was deeply involved in ritual worship in repeat genuflection-like postures. And while the foreign preacher (Binyamin Netanyahu) mocked the "farcical parliament of Iran" where someone like this protestor would be suppressed and abused, Rae was beaten by AIPAC goons under the warm glow of Israeli-American "real democracy," landing her in the hospital where she was treated and then arrested by "Tehran" metro police in the District of Columbia.


The devotees did not care. The "shot" at Iran resonated strongly with them and, without missing a beat, they started the worship again in earnest. The preacher narcissistically claiming and accepting a self-awarded badge of honor for allowing protests like these in our civilized societies and how he is working hard in his promotion of democracy in the darkest recesses of the globe where savages do not allow dissent. [Rae Abileah DemocracyNow Video]
This preacher could not have been more un-original. In a short loop of history it almost appears as if he had borrowed this badge from a bible-thumping "almost US presidential" candidate visiting occupied East Jerusalem to inaugurate construction of an illegal settlement and using the exact same words to mock a "Palestinian supporting" Israeli Artists' group that had boycotted the event. [Hucakbee's badge of honor video.] It was never made clear who would bother with the trouble of boycotting Huckabee other than people who refused to watch his show. 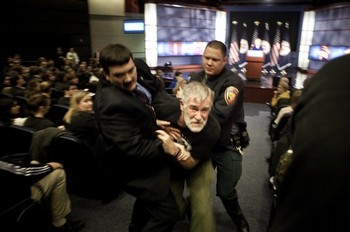 
In another repeat of history's short loop, a second "ray" of hope, an ex-CIA analyst, Ray McGovern, was beaten, dragged out bleeding, and arrested before receiving medical attention when he stood silently in protest at a Hillary Clinton Speech in February 2011 during a major address at George Washington University calling for Internet freedom around the world, again most notably pointing out Iran as a flagrant example of abuse of human rights where dissent is violently suppressed. [Ray McGovern's DemocracyNow Video]

Related Topic(s): AIPAC; Benjamin Netanyahu; Congress; Congress Democrats; Congress Republican GOP; Congressional Ethics; Rae Abileah; Ray McGovern, Add Tags
Add to My Group(s)
Go To Commenting
The views expressed herein are the sole responsibility of the author and do not necessarily reflect those of this website or its editors.