In the struggle against racism and police violence, we can't forget the victims of imperialism 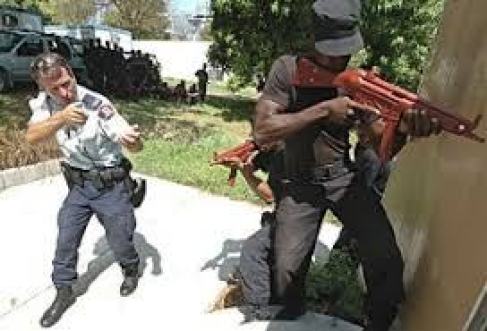 As recent events in the US, Canada and elsewhere demonstrate the world has a cop problem. Police act as if they are above the law; they lie to justify their actions; they especially target Black and indigenous people; they seem to care more about protecting property than people.

Interestingly this is also a description of imperialist foreign policy. The experience of people from the Congo, Haiti, Algeria, Guatemala, El Salvador, Indonesia, Vietnam, Cambodia, Chile, Angola, Brazil, Ghana and dozens of other countries trying to establish economic and political independence mirrors that of North American indigenous and racialized communities asserting their rights to political, social and economic equality. The Freedom Riders, Black Panthers, Black Lives Matter, American Indian Movement, Idle No More and Wet'suwet'en hereditary chiefs were met with demonization, violence and repression as were the struggles for independence and social change in the countries listed above.

Finally, after centuries of struggle, defamation, murder and countless other forms of oppression the majority of Canadians and Americans seem to now support equality for all their fellow citizens and have turned against the forces of repression as witnessed by thousands of demonstrations against police brutality over the past three weeks. But what about our fellow citizens of the world, not just those in our own country? What about the brutality and repression inflicted upon them?

We need to understand the common struggle and link them. This isn't abstract. Training and funding police elsewhere is part of Canada's pro-corporate, pro-Empire, white supremacist, foreign policy.

Alongside the US, Canada has funded, equipped and trained the neo-Nazi infiltrated National Police of Ukraine (NPU), which was founded after the anti-Russian Euromaidan movement overthrew Viktor Yanukovych in 2014. A former deputy commander of the far-right Azov Battalion, Vadim Troyan had a series of senior positions in the NPU, including acting chief. When a policeman was videoed in early 2019 disparaging a far right protester as a supporter of Stepan Bandera, the National Police chief, National Police spokesman, Interior Minister and other officers repudiated the constable by publicly professing their admiration for Bandera who carried out murderous campaigns against Poles and Jews during the Nazi occupation. Since 2016 between 20 and 45 Canadian police have been in the Ukraine to support and advise the NPU and Foreign affairs minister announced another $2 million contribution to the Ukrainian police in March.

Since playing an important role in violently ousting Jean-Bertrand Aristide's government in 2004 Canada has built up a repressive Haitian police apparatus to enforce its anti-democratic policies. The Canada-financed, trained and overseen police force terrorized Port-au-Prince's slums and repeatedly shot at peaceful protests during the two year coup government.

Much to the delight of the country's uber class-conscious, often racist, elite, Canada has ploughed over $100 million into the Haitian police and prison system over the past decade and a half. Since 2004 Ottawa has taken the lead in strengthening the repressive arm of the Haitian state. (The country's army, created during the 1915-34 US occupation, was disbanded by Aristide in 1995.)

In recent years the Canadian trained and funded police have protected the neo-Duvalerists ruling Haiti. During the popular uprising against President Jovenel Moïse between July 2018 and November 2019 the police killed dozens, probably over 100. Amidst this violence, Canadian officials have repeatedly promoted and applauded the Haitian police.

In the struggle against racism and police violence we need to enlarge our circle of those who deserve our support to the entire world. The "cop problem" we face is intimately tied to wealthy, generally white, minorities imposing their will on the majority. Reforms of the police are doomed to fail until we overthrow unjust economic systems that require force to maintain minority rule.

Canada's Security Council defeat is a win for Palestine

Canada's defeat in its bid for a seat on the United Nations Security Council is a major victory for Palestinian solidarity. It also puts Canada's Israel lobby on the defensive.

Israeli politicians and commentators have begun to publicly bemoan the loss. Israel's ambassador to the UN, Danny Danon, told the Jerusalem Post, "we are disappointed that Canada didn't make it, both because we have close ties with the country and because of the campaign that the Palestinians ran against Canada." In another story in that paper headlined "With annexation looming, Canada's UNSC upset is bad news for Israel, US" Deputy Managing Editor Tovah Lazaroff labels Canada's loss "a sharp reminder of the type of diplomatic price tag Israel's allies can suffer on the international stage."

Inside Canada the Security Council defeat is a blow to the Israel lobby. While the Canadian media has generally minimized the impact Canada's anti-Palestinian position had on the vote, the subject is being raised. In a Journal de Que'bec column titled "Why did Canada suffer a humiliating defeat at the UN?" Norman Lester writes, "it is the support of the Trudeau Liberal government for Israel, like that of Harper before him, that is probably the main reason for Ottawa's two successive setbacks. Ireland and Norway have more balanced policies in the Israeli-Palestinian conflict than Canada." He concludes the article by noting, "Canada has no chance of returning to the Security Council in the foreseeable future unless there is a radical change in its position regarding the Israeli-Palestinian conflict."