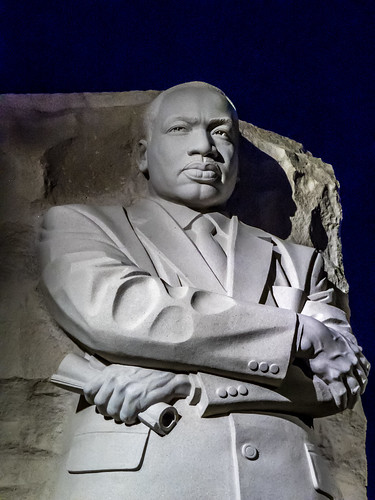 By James A. Haught

When I came of age in the 1950s, African Americans were shunned outcasts, treated as tainted inferiors, denied the privileges and benefits of white society. They were forced to live in squalid ghettos, like Indians on reservations. They were rejected for good white jobs, even if they held college degrees. They couldn't enter white restaurants, white theaters, white hotels, white swimming pools, etc. (except to work as low-paid maids, janitors and the like). Their children couldn't enter white schools, but were sent to inferior black schools. White police constantly stormed black zones, kicking in doors in liquor and prostitution raids, but rarely treated white zones in that manner. In Dixie, cruel lynchings lingered.

When the historic civil rights movement stirred, my Unitarian congregation was fiercely involved. Members joined sit-ins at lunch counters refusing to serve blacks. Members joined equality marches. They clamored for human rights laws and joined integration committees. They even helped create a mixed-race day-care center in a poor African American ghetto. My pre-school children attended it. I was swept up in the crusade against Jim Crow segregation. I made a one-person attempt to integrate the members-only lake community where I lived outside Charleston, West Virginia.

But a disappointment happened: After integration succeeded, it gradually became clear that poverty, crime, drugs, hidden prejudice and other social blights still cursed much of the African American community. De-facto segregation still excluded many blacks from good jobs and opportunities. While a few educated blacks moved upward, the wonderful civil rights victory failed to produce the glorious transformation I had envisioned. In fact, as successful blacks were allowed to move out of ghettos, the loss of natural leaders left their old neighborhoods more vulnerable to degradation. A lesson was clear: Societal struggles are much more complex and difficult than they seem at first glance.

Nonetheless, America's legendary civil rights movement was a progressive triumph of enormous proportions. It belongs in a Liberal Hall of Fame. It wiped out entrenched apartheid that conservatives had defended for a century. Here's a partial chronicle:

Thurgood Marshall (1908-1993) grew up in Baltimore, grandson of a slave. After college, he wanted to attend the University of Maryland law school, but it wouldn't admit blacks, so he graduated at the top of his class at Howard University.

After becoming an NAACP attorney, Marshall won impressive Supreme Court victories. In 1944, he wiped out all-white Democratic Party primary elections in Texas. In 1948, he defeated white-only covenants in property deeds. In 1950, he forced the University of Texas law school to integrate. And in 1954 came the blockbuster that changed America forever: Brown v. Board of Education, which forced public schools to integrate.

To the outrage of southern racists, President Kennedy appointed Marshall a federal appeals judge, then President Johnson named him America's solicitor general. Then came a breakthrough nomination to the Supreme Court. One of my newspaper colleagues, Wil Haygood, outlined this episode in a book titled Showdown: Thurgood Marshall and the Supreme Court Nomination that Changed America.

Haygood said LBJ's desire to make Marshall the nation's first black Supreme Court justice faced a problem: no vacancy. So the crafty Johnson pulled a scheme: He told aging Justice Tom Clark that he would appoint his son Ramsey as attorney general, but it would be awkward with his father on the high court. So the elder Clark retired, his son became attorney general, and Marshall was appointed to the new Supreme Court vacancy.

Angry southern senators vowed to filibuster and block the nominee. They stalled a hearing on him -- but racial rioting exploded in Detroit over police killings of unarmed black youths, putting pressure on the Senate to act. Then Johnson pulled another manipulation: "The cunning LBJ persuaded twenty segregationist senators to abstain from voting, an unbelievable occurrence for such a charged and historic vote," Haygood wrote.

Related Topic(s): America; Cruelty; Equality; Justice; Liberals; Rights; Segregation; South, Add Tags
Add to My Group(s)
Go To Commenting
The views expressed herein are the sole responsibility of the author and do not necessarily reflect those of this website or its editors.