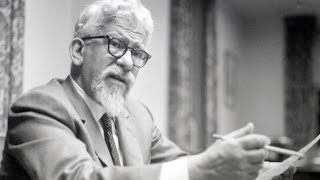 Abraham Joshua Heschel speaking at UCLA 5/25/1963 From the archives of the UCLA Communications Studies Department. Digitized 2013. The views and ideas expressed in these videos are not necessarily shared ...
(Image by YouTube, Channel: UCLACommStudies)   Details   DMCA

Subsequently, I ordered a copy of the 2005 paperback edition of his book that includes an introduction by Susannah Heschel (born in 1956), Rabbi Heschel's daughter (pages vii-xvi), herself a distinguished professor of Jewish studies at Dartmouth College. It is an extraordinary book so extraordinary that it might be sui generis, just as St. Augustine's extraordinary book Confessions is sui generis because of its culminating reflections on time.

I'd like to tell you about certain things that Rabbi Heschel (1907-1972; Ph.D. on the Hebrew prophets, Humboldt University of Berlin, 1933) says in his short book about the time/space contrast that I found fascinating. In my estimate, Rabbi Heschel's discussion of the time/space contrast is comprehensive and complete as it stands for his purposes in his extraordinary book.

Rabbi Heschel writes with moral clarity about the time/space contrast that Pope Francis (born in 1936) lacks. Granted, the pope is photogenic, telegenic, and charismatic. Granted, in spontaneous conversation, he has occasionally says something succinct that is quotable. However, in the various written documents that he has issued, he tends to be garrulous which may be characteristic of all papal documents. But Pope Francis also tends to write sharp critiques of the modern world which Rabbi Heschel also critiques in his short 1951 book.

See my OEN article "Why Progressives and Liberals Should Be Wary of Pope Francis' Encyclical About the Environment" (dated June 14, 2015). Briefly, Pope Francis' critique of modern culture is totally consistent with the church's critique of modern culture before the Second Vatican Council (1962-1965) which of course is when young Jorge Mario Bergoglio was being educated as part of his Jesuit training.

But also see my recent OEN article "Pope Francis on Evil and Satan" (dated March 24, 2019). Briefly, in the spirit of giving credit where credit is due, I give Pope Francis credit for recognizing that priest sex abuse and the cover-up of that abuse are evil.

Now, in the introduction to the 2005 edition of her father's short book, Susannah Heschel reports that "early readers of the book couldn't imagine my father was the author they thought my mother had ghostwritten it!" (page xii). The style of the book is evocative.