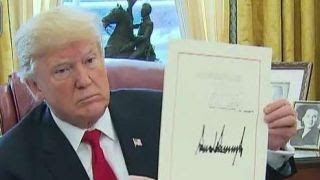 Donald Trump has gotten some well-deserved ridicule on his boasts about the "amazing" economy. While the 4.1 percent growth figure reported for the second quarter is impressive, it is hardly qualifies as amazing. There were four quarters in the Obama years with faster growth. Going back before the Great Recession there were many quarters with much more rapid growth. My favorite is the second quarter of 1978, back when Jimmy Carter was president, and the economy grew at a 16.4 percent rate.

But getting beyond Donald Trump's conception of "amazing," the real issues are whether the rate is sustainable and whether Trump's policies deserve credit. On the second point, his tax cut almost certainly deserves some of the credit for the quarter's growth. The tax cut is putting more than $150 billion into people's pockets this year. While it is true that the bulk of this money is going to the rich, who will spend a smaller share of their tax cut than a middle income household, the extent to which they will increase their spending is not zero.

A quick check on whether people are spending their tax cut is the saving rate. If people are not spending the tax cut, the saving rate should jump. There has been a modest increase, with an average of 7.0 percent in the first half of 2018 compared to 6.7 percent for 2017. This would suggest that people are spending the bulk of the their tax cuts. This assessment requires an important qualification: savings data are subject to very large revisions, so when we have the final data for the first half of 2018, it may look very different from what the numbers show now.

Consumption increased at a 4.0 percent annual rate in the quarter, making it the largest contributor to the quarter's growth. This is largely a bounce back from weak growth of 0.5 percent in the first quarter. The two quarter average is 2.3 percent, which is respectable, but hardly exceptional. It is certainly plausible that consumption will continue to grow at roughly this pace.

Non-residential investment grew at a 7.3 percent annual rate, adding 0.98 percentage points to growth for the quarter. This is respectable rate, but hardly in keeping with the investment boom story that provided the rationale for the corporate tax cut.

Furthermore, the biggest factor in the jump in investment was an increase in investment in mining structures (primarily oil and gas drilling) of 97.1 percent. While this increase may be partly attributable to Trump's drill everywhere policy, the more likely cause is the increase in world oil prices from around $40 a barrel three years ago to close to $70 today.

There were similar increases in spending on drilling under Obama. For example, it rose at 84.5 percent and 65.9 percent annual rates in the first and second quarters of 2010 as energy prices jumped back from recession lows. Whether or not Trump gets credit depends on whether we think he is responsible for the rise of world oil prices.

Much has been made of a surge in exports that seems to be the result of an effort by foreigners to stock up in anticipation of retaliatory tariffs. This is very plausible. Net exports added 1.06 percentage points to growth. This surge will not recur in future quarters. That means net exports will likely be a drag on growth.

However, this effect will be largely offset by inventories. A reduction in inventories subtracted a percentage point from growth in the second quarter. This component will almost certainly add to growth in the next two quarters.

One item that deserves attention is the 1.1 percent drop in residential investment, the second consecutive quarterly decline. This is a modest drag on growth, but more importantly it indicates that housing construction may be leveling off. This means that we may not see the increase in housing supply needed to put a check on rental inflation.

The Fed's interest rate hikes are the immediate culprit here, as the anticipation of higher short-term rates have caused the 30-year mortgage rate to increase by roughly a percentage point from levels of two years ago. The tax cuts do play a role also, since the Fed is (rightly or wrongly) responding to what it sees as the risk that the tax cuts may over-stimulate the economy, causing inflation.

On net, we can say that the economy is likely getting some near-term boost from the tax cut, which could lead to a growth rate of close to 3.0 percent in 2018. It is difficult to see this persisting into 2019, unless we see a pick up in productivity growth as the labor market tightens and employers are forced to pay higher wages.

It is important to point out that for almost everyone but economist types, growth does not mean anything. People care about whether they have a job and whether their pay is rising. On the last point, the news has not been good, as real wages have been flat over the last year.

However, it is important to note that without the increase in energy prices they would have risen 0.5-0.7 percent. That is not a great story given how much ground has to be made up for workers to get their share of growth, but at least it is movement in the right direction. And, as the energy price hikes of last summer move out of the 12-month window, we will be looking at real wage gains of 0.5 to 0.7 percent, what workers were seeing before Donald Trump became president.

Dr. Dean Baker is a macroeconomist and Co-Director of the Center for Economic and Policy Research in Washington, D.C. He previously worked as a senior economist at the Economic Policy Institute and an assistant professor at Bucknell University. (more...)
Related Topic(s): Economy; Exports; Trump Tax Bill; Workers, Add Tags
Add to My Group(s)
Go To Commenting
The views expressed herein are the sole responsibility of the author and do not necessarily reflect those of this website or its editors.