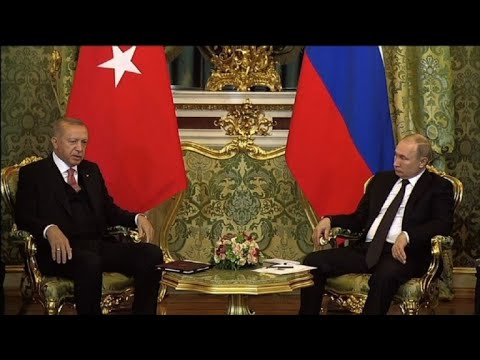 At the start of their discussion marathon in Moscow on Thursday, Russian President Vladimir Putin addressed Turkish President Recep Tayyip Erdogan with arguably the most extraordinary diplomatic gambit of the young 21st century.

Putin said: "At the beginning of our meeting, I would like to once again express my sincere condolences over the death of your servicemen in Syria. Unfortunately, as I have already told you during our phone call, nobody, including Syrian troops, had known their whereabouts."

A predictable feature of the new ceasefire is that both Moscow and Ankara part of the Astana peace process, alongside Tehran remain committed to maintaining the "territorial integrity and sovereignty" of Syria. Once again, there's no guarantee that Erdogan will abide.

It's crucial to recap the basics. Turkey is deep in financial crisis. Ankara needs cash badly. The lira is collapsing. The Justice and Development Party (AKP) is losing elections. Former prime minister and party leader Ahmet Davutoglu who conceptualized neo-Ottomanism has left the party and is carving his own political niche. The AKP is mired in an internal crisis.

No NATO fanatic will ever admit it, but once again it was Russia that just prevented the threatened "Muslim invasion" of Europe advertised by Erdogan. Yet there was never any invasion in the first place, only a few thousand economic migrants from Afghanistan, Pakistan and the Sahel, not Syrians. There are no "one million" Syrian refugees on the verge of entering the EU.

The EU, proverbially, will keep blabbering. Brussels and most capitals still have not understood that Bashar al-Assad has been fighting al Nusra/ISIS all along. They simply don't understand the correlation of forces on the ground. Their fallback position is always the scratched CD of "European values." No wonder the EU is a secondary actor in the whole Syrian tragedy.

Related Topic(s): NATO; Recep Tayyip Erdogan; Syria; Tragedy; Vladimir Putin, Add Tags
Add to My Group(s)
Go To Commenting
The views expressed herein are the sole responsibility of the author and do not necessarily reflect those of this website or its editors.