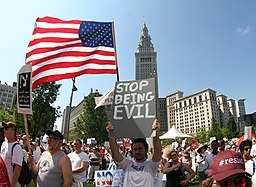 Protests can be so unseemly. Unprofessional. Useless. So say people who don't know any better.

When every day in the U.S. seems like a Twilight Zone episode whose plot was inspired by A Tale of Two Cities ... when we continue to accommodate the ever-metastasizing dystopia created by our government ...

... then the usual resistance - voting out the bad guys, petitions, lawn signs, emails to Congress, posting a call for McConnell's/Pelosi's resignation on Facebook - is not enough.

It's time for an intervention. Time for protest.

Are we living in a Twilight Zone? Submitted for your approval - a few affirmative examples:

1) Tents, battered cars, pick-up trucks line the road. Next to a battered truck, a bucket filled with water and a sponge... a muddy doll ... the remains of last night's camp fire. A scene from The Grapes of Wrath or 2020-style affordable housing? Yes.

2) A thought leader proposes that some people die for the good of the nation's economic order. Fiction or reality? Yes. Jonathan Swift suggests that poor parents sell their babies to rich people to eat ("A Modest Proposal," 1729). And Texas Lieutenant Governor Dan Patrick suggests that getting people back to work and "restoring" the economy is too important to let the potential spread of COVID-19 to seniors - whom it might kill - get in the way. Unlike Swift, he meant what he'd said.

So what's Congress doing? Not much. But to be fair, these are huge problems, and there isn't much time for our leaders to work on them, what with their two-week July vacation and their month off in August.

What about the president and his Democratic challenger? They have been busy - hawking beans and hiding out. And the public? They are stunned! By Kanye's presidential bid - not by the contempt, cruelty, and callousness permeating D.C. in the middle of both a public health and an economic crisis, each of historic proportions.

When the public puts up with a pandemic that the president appears to treat first as a profiteering opportunity, then as a campaign annoyance ... when Mitch McConnell laughs at the prospect of extending the aforementioned $600 lifeline before it expires ... it's time for protest. Time to follow the lead of Black Lives Matter and other activists - e.g., Seattle's Fight for 15 folks and Tax Amazon activists - whose work often has meant the difference between real progress and unity commissions, pragmatic incrementalism, bipartisan "compromise," and the like.

Protest breaks the silence, validates outrage, galvanizes activists and allies, and redefines what is possible.

Yes, protests are unseemly. They have to be. Owen Keehnen, an LGBTQ historian and ACT-UP organizer, talked about the group's in-your-face approach to AIDS activism: "There were people [allies] who feared we'd lose everything we'd gained if we weren't cooperative and nice ... [ACT UP's response was] "... cooperative and nice is killing us."

For 25 years, Lisa has worked for and with nonprofits, sharing her expertise in organizing, fund raising, and community outreach. Organizing: Lisa has worked as a community, tenant, and labor organizer, on both local-level and statewide (more...)
Related Topic(s): Compromise; Corona Virus Coronavirus Covid-19; Economic; Health; Homelessness; McConnell-Mitch; Pandemic; President; Protest; Resistance, Add Tags
Add to My Group(s)
Go To Commenting
The views expressed herein are the sole responsibility of the author and do not necessarily reflect those of this website or its editors.

"Give Me Your Tired " Masses Yearning To Be Free," Blah, Blah, Blah

Protests can be so unseemly

2019 - The Year The Grinch Really Did Steal Christmas